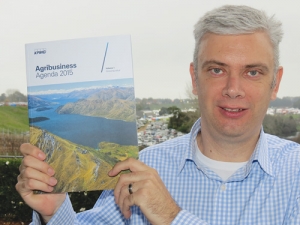 New Zealand's agricultural exports are predicted to grow to $100 billion a year in the next 20 years and will be much more diversified than the current mix.

Speaking last week at an Auckland conference on farming and the future of food, Ian Proudfoot, KPMG's global leader for agribusiness and food, said such an increase would require raising the compound annual growth rate of agricultural exports from 4.5% to 5.4%, but that would happen only with a 'cultural shift' towards more value-add products.

"That has to be driven by organisations aligning their cultures to those of value growth, focusing on intelligence in-market, building better relationships with customers, employing the right people and offering branded experiences."

Proudfoot says NZ companies are good at building things such as new powder driers – for which they know the cost and outcome – and must instead take more risks and move into the unknown.

"The biggest constraint is that most organisations are geared to accept lower-risk activity. The right leadership is critical to taking on these opportunities because if we keep doing what we're doing now, we're not going to be as successful."

At least half of NZ's agricultural exports are dairy and forestry related, Proudfoot said. Future growth will come from new products that can extract a premium from the growing numbers
of middle class consumers.

Proudfoot predicts strong growth in the beef sector which he says will become NZ's single biggest agricultural export within 20 years due to the middle class's rising demand for products such as hormone free and grass-fed steak.

He also predicts a move to dairy liquids rather than the dried powder products due to a lack of water in developing markets and despite declining fluid milk sales in recent years.