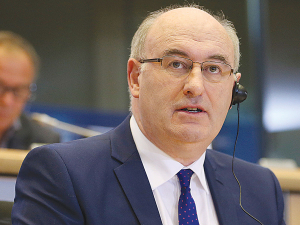 Hogan flew home to Dublin from Brussels to join a group of Irish politicians and officials at a special golf match and dinner in the town of Clifden in Co Galway. When he arrived in Ireland, Hogan tested negative for Covid-19, but didn’t self-isolate for 14 days as required, and went on to Clifden. Hogan’s actions were widely condemned in Ireland and in Europe and he subsequently resigned.

According to NZ trade commentator Mike Petersen, Hogan’s demise could have a negative impact on our FTA negotiations with the EU.  Petersen says having Phil Hogan as Trade Commissioner was helpful in that Ireland and NZ are very similar and understand the value of exporting, even though Ireland may not always agree with some negotiating points put up in the FTA negotiations.

Hogan visited NZ just over a year ago and knows what NZ agriculture is about and has good relationships with our people. Now the search is on for a new commissioner to replace Hogan.

“The risk is that potentially having a non-Irishman going into the role of Trade Commissioner could make it tougher for us,” Petersen told Rural News. “There are a lot of countries in the EU who are far less supportive of free trade than Ireland and there is a chance that someone who holds very protectionist views could get the position.”

Under EU rules, every member state has the right to have a commissioner and the President of the EU, Ursula von der Leyen, has now asked Ireland to nominate two people – a man and woman and she will make the final choice. Petersen says there is no guarantee that Ireland would get the prestigious Trade Commissioner role and that von der Leyen may take the opportunity to have a complete reshuffle of the portfolios of all the commissioners.

Ireland is now going through the process of nominating their two people, and one of names being talked up is 48 year-old Simon Coveney, the present Irish Minister of Foreign Affairs.

“I know him and have met him in Ireland a number of times. He’s a first class guy and he’s been to NZ and knows what NZ is about,” Petersen told Rural News. “If he were the guy chosen as Trade Commissioner that would be one of the best outcomes for us. But the big question is whether von der Leyen would put him straight into trade because it is quite a complex portfolio.”

Plans for the United Kingdom to join the Comprehensive and Progressive Agreement for Trans-Pacific Partnership (CPTPP) have come with a warning from New Zealand dairy companies.