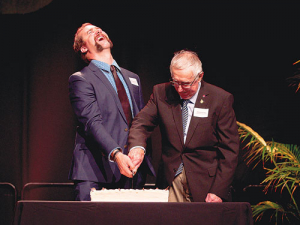 2017 Young Farmer of the Year Nigel Woodhead and his 1970 counterpart Allan Anderson cut the birthday cake at the competition’s 50th anniversary celebration.

About 400 people attended, including the 1970 winner Allan Anderson, the longest-surviving champion, who cut the anniversary cake, and last year’s winner Nigel Woodhead.

“This is the first time we’ve had so many grand finalists in one room,” said NZ Young Farmers chief executive Terry Copeland.

The contest was first run in 1969, initially as a radio quiz with no practical elements.

“I admire the women who make it through now because the contest has a much larger practical component,” said Clemens.

“I don’t think it will be long until we have a female grand champion. Women can do anything.”

“We were all pretty green about what was required for television,” he said. “We were extremely dressed up and serious. Today the contest is more entertaining and has a bit more audience appeal.”

Kane still recalls the modules finalists had to tackle.

“Horticulture was just coming into its own in the 80s, so we had to plant and prune a few trees. We also had to hang gates, fix a water pump, repair the chain on a motorbike and deal with a tractor that had run out of diesel.”