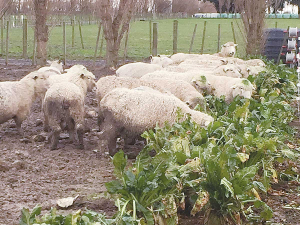 Sheep farmers adopting fodder beet for winter grazing are being warned that it could result in serious under-nutrition in multiple-bearing ewes.

A newly-published AgResearch study found that feeding twin-bearing ewes on fodder beet results in poorer body condition for both ewes and lambs and double the neonatal lamb mortality.

The study was done in 2017 by a team from AgResearch's Grasslands Research Centre, Palmerston North, funded by AgResearch's Strategic Science Investment Fund and Beef + Lamb New Zealand. It compared two mobs, one fed fodder beet and another, ryegrass. Hay was freely available to both groups to provide extra fibre.

In their published conclusions, the author's note that fodder beet provides a cost-effective feed option in times of pasture shortages.

"However, the results of this study provide for the first time in the literature, the data to support the recommendation that fodder beet should be avoided as the main feed source for multiple-bearing ewes in mid-late pregnancy."

AgResearch Senior Scientist Dr Sue McCoard told Rural News there was a lot of interest in fodder beet in ruminant systems, because it has a high dry matter yield, relatively low cost compared to other supplements. She adds that it also gives flexibility - especially when grass supply may be limited in winter.

However, the research showed that fodder beet-fed ewes displayed lower growth rates, lower body weights and poorer body condition scores than the ryegrass-fed ewes. A number of fodder beet ewes sacrificed autopsied prior to lambing and showed lower fat and muscle, suggesting they were drawing off their reserves to meet the demands of pregnancy.

"When you put all of those measurements together, they're basically saying that those ewes were subject to under nutrition compared to the ryegrass ewes."

McCoard explained that fodder beet has a high dry matter yield, very high sugar content - "great for providing lots of energy" - but low protein and low fibre. She says a lack of what's known as neutral detergent fibre (NDF) is believed to impact the ability to digest sugars.

"It could be that these ewes are having difficulty in utilising that energy just because they are not getting enough fibre and that was despite the fact that we gave them free access to hay as a fibre source."

McCoard says the researchers had expected some protein deprivation in the lambs but, based on the nutritional content, they thought there would be sufficient energy and protein for the ewes to maintain condition.

"But we actually saw a much bigger effect on the ewes than we had anticipated and we didn't plan on that at all, so it was quite surprising for us."

In the lambs, the most striking difference between the two groups was the lower survival rates - 29% mortality in the fodder beet lambs compared to 12% for the ryegrass group.

The fodder beet lambs had lower birth weights and lower growth rates, and twice as many had trouble thermo-regulating, which is a function of brown fat deposits accumulated in utero.

While the study did not directly measure lactation, McCoard said the lamb performance deficits could have come from undernourishment in utero negatively impacting their capacity to grow, during suckling as a result of the ewes, or a combination of the two.

McCoard told Rural News the study was one in a suite of studies now underway evaluating the effec of early life nutrition on lifetime performance in ruminants. She says fodder beet still looks good on paper and could be a really good feeding option for other classes of livestock.

"I wouldn't be using these numbers to say you will likely get this on your farm because every farm will be different," McCoard adds. "Every environment will be different. But what it does point out is that we do seem to have some negative effects on production in both the twin-bearing ewes and in their lambs when feeding this diet so we should be careful about how we're feeding it.

"More importantly, what can we put alongside this crop to actually address the nutritional deficit in this diet, to be able to reduce those negative impacts?"

She says the number and bodyweight of lambs weaned per ewe is a primary determinant of profitability in commercial lamb production, and the biggest cost to a farmer is feed. Optimising the use of that feed resource is essential.

Over the last couple of decades there had been a really strong push to improve lambing percentage as a strategy to improve productivity but also to reduce environmental footprint.

"We know that survival and growth are two of the biggest levers that we can use to lower the emissions intensity on our farms.

"We've made really good efficiency gains. The sheep and beef sector is leading the way in that regard and optimising feed use and animal performance is just another way that we can help contribute to that. Optimising the feed to the animal requires knowledge like that generated in the study."

Farmers considering using lucerne as a flushing feed going into ewe mating should be cautious, especially if the weather has been wet and warm.

The importance of managing ewes in late pregnancy and early lactation

The ewe is under her greatest nutritional and metabolic stress in late pregnancy and in early lactation.