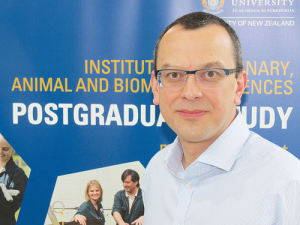 The attraction of heading a world-rated veterinary school, a love of New Zealand and disillusionment with Brexit persuaded Professor Jon Huxley to apply to lead the School of Veterinary Science at Massey University.

Reporter Peter Burke spoke with the Professor and Head of School of Veterinary Science at Massey about the challenges the veterinary profession faces in NZ and worldwide.

Jon Huxley is no stranger to New Zealand. This keen outdoors man fell in love with NZ 25 years ago during a seven-week tour. He has since spoken at several conferences here, the last in 2011.

Huxley was born on a dairy farm near the north Wales border and retain an interest in the dairy sector, his special areas of expertise being endemic diseases in cows, especially mastitis and lameness.

He is regarded as a top UK academic vet and prior to his Massey University appointment was at the University of Nottingham.

He says a challenge facing vet schools worldwide is that young people entering the profession are more interested in small companion animals than in large production animals. Huxley says he’ll be interested to know if the problem is as widespread in NZ as in the UK, but suspects the balance is better here.

“Attracting early 20-year-olds into rural communities, where they haven’t got a city or a base, is always going to be a challenge,” he told Rural News.

“They come out of a university environment where there are centralised amenities. They are used to a lifestyle and then we are asking them to look for roles in remote small communities that are possibly not very attractive to them.”

Huxley says we have to acknowledge that things have changed over the last 30 years and that generations Y and Z are different from the baby boomers. Young people’s expectations of work life balance and many other things are very different.

“We have to accommodate them because they are not going to change. We are going to have create new business models that meet their requirements.”

Huxley believes the rural urban divide is also a factor, with teachers in secondary schools not understanding the career opportunities in the rural sector.

“A challenge in veterinary medicine is to attract a very talented cohort from each generation who are aspirational and who have their opinions of what the vet profession is; these are set at a very early age,” he explains.

“So they come to us thinking that the vet [conforms to] the classic James Heriot model, without really thinking about the strengths of the broader education that a veterinary medicine degree gives them.”

He adds that in the modern era, with complex rules and regulations, vets are taking on a wider role in the rural sector – that of the farm consultant.  But Huxley says this has brought with it a new set of issues.

He points out that the main veterinary business model has the cost of the time vets spend in the field effectively being ‘subsidised’ by the sale of veterinary medicines. And the practices that don’t make large sales struggle to charge the true cost of their time because farmers are unwilling to pay for this.

Jon Huxley makes no secret of his being a fan of NZ and that he was stopped in his tracks when he saw advertising for the position of Massey University vet school head.

“When I saw the advert it made me think for the rest of the day about the opportunity,” he told Rural News.

“Secondly, my wife grew up as an ex-pat in the Middle East so we’d been looking for a move abroad for some years. Her speciality English language narrowed it down to NZ, Australia and the US. The US isn’t for me, Canada would have been too cold so it was a great opportunity in the right country,” he says.

However, ironically considering the M. bovis issue, Huxley is impressed with how NZ’s biosecurity at its border.

“NZ has done a great job over the years of maintaining its island status,” he says. “Every time I come into NZ I am blown away by the quality of immigration and checks you have. Nowhere is there a place as thorough as NZ.”

Massey University is cashing in on the fact that most farmers need to have farm environment plans by 2025 as part of the Government’s new freshwater regulations.