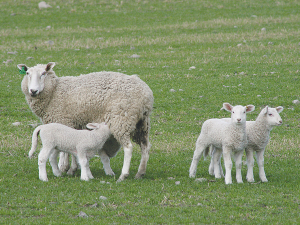 While udders are vital for lamb survival, surprisingly little research has been done on udder health.

Massey University veterinarian Kate Griffiths sought to rectify the problem by leading a three-year trial looking at the impacts of udder faults on a sheep breeding system.

Through the study, Griffiths also wanted to initiate a standard scoring system for udder health. She shared the early results of the trial at two B + LNZ Farming for Profit days in Canterbury recently.

The study involved 1200 two- and four-tooth commercial Romney ewes run on a Massey University farm. These ewes were followed for three years and had their udders examined and scored four times annually for factors such as defects, symmetry, appearance and teat positioning, at pre-mating, set stocking, tailing and weaning.

Lambs were matched to the dams and data such as lamb weights and survival to weaning was also collected.

As part of the study, several commercial farmers and vets were also surveyed about their experiences with udder health.

Griffiths says that while 85% of the farmers surveyed as part of the trial were actively examining ewe udders, the time, the method of examination and the factors upon which culling decisions were made differed widely.

Preliminary results show that udder defects are important, and lambs born to ewes with lumps or hard udders are three to five times more likely to die. There was also a 5-35gm/day decrease in lamb growth rates in ewes with diseased udders.

Griffiths says that pre-mating is a critical time to palpate udders and as part of the study an udder score given to each ewe proved to be a good predictor of lamb survival to weaning.

By comparison, lambs born to ewes with normal udders had a 12% chance of dying.

This means there were much higher lamb mortality rates in ewes found to have defective udders at their pre-mating check.

Griffiths says that unlike dairy cows, sheep don’t respond well to treatment for udder problems so at this stage culling is the best option.

There is some suggestion that some udder problems are developing in the dry-off period post-weaning, so areas for further investigation include weaning management – particularly in early weaning -- and the impact of high lamb growth rates and alternative forages on udder health.

The study found that 88% of ewes that were found to have udder defects at weaning still had those defects four to eight weeks later, but more defects also appeared in the flock and this highlighted the need to carry out a pre-mating udder and teat palpation to identify which ewes are likely to have poorer performing lambs.

What to cull for

Cull: ewes with black mastitis, ewes with big lumps in the udder – especially at the bottom of the udder and ewes with rock hard udders.

Don’t cull: superficial lumps near the udder but not part of the udder (they can be golf-ball size lumps in front of the udder). These lumps are quite common at weaning (affecting 3.3% of ewes in the study) but disappeared post-weaning.