Seeing the bottom of M. bovis? 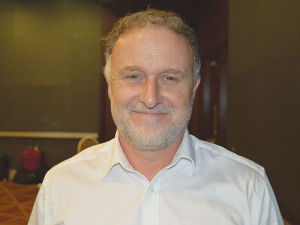 An update meeting on Mycoplasma bovis in Hamilton earlier this month, threw up several questions, not least where were all the farmers?

No more than 10 attended, outnumbered three to one by advisory staff led by MPI director of response Geoff Gwyn. It appears that either MPI has answered all Waikato farmers’ questions or the disease does not worry them.

The 2017 detection of M. bovis, then the May 2018 decision to eradicate has seen 370 staff working on it, close to one million tests done and $50 million paid in compensation.

The meeting, on the eve of the release of the M. bovis 2019 National Plan, heard Gwyn cite estimates that the disease would incur losses of $1.3b over ten years if untreated, with knock on-effects on animal health particularly in low resistance to other diseases.

“When we set out to write the plan, we wanted it to be easily understood by the average 13-year-old,” Gywn said. “Meaning everyone could be clear about what we were setting out to achieve.”

The plan is 1) to eradicate M. bovis by effective surveillance and stopping the spread depopulation; 2) reduce the impact of the disease and the eradication for all those affected; 3) leave NZ’s biosecurity system stronger by applying the lessons learnt during the M.bovis incursion.

There will likely be a major review of the Biosecurity Act, now 20 years old, in light of the global economy evolving such that disease incursions are more likely.

To date, confirmed properties number 161, of which 58 are now classed as active; 103 are in the cleared category; and 122 are under notice of direction (NOD), having been considered high-risk, maybe because of links to cattle movements. And 216 more properties are also under surveillance, classed as ‘low-risk’, with minimal controls or testing.

Data collected from six round of bulk milk testing using the PCR test (DNA test looking for the disease) and three rounds of the ELISA test (blood test) was reviewed by the technical advisory group. This suggested the incursion was from a single source probably as far back as late 2015 or early 2016.

Gwyn says beef and drystock testing is going on in about 150 calf-rearing operations NZ-wide who get stock from various sources; and testing is at the Five Star Feed Lot in Mid Canterbury. (Five Star is a beef finishing operation getting stock from multiple sources then sending animals out for slaughter — no on-selling.)

To date, MPI has received 900 claims for compensation; more than 500 applications have been completed or received a part payment, costing $50 million.

MPI reminded farmers that to be eligible for compensation they must be able to demonstrate a loss because of the Biosecurity Act implementations, or loss of property or goods that are damaged or destroyed. Single or multiple claims will be accepted and usually processed within 24 days of submission with the right paperwork.