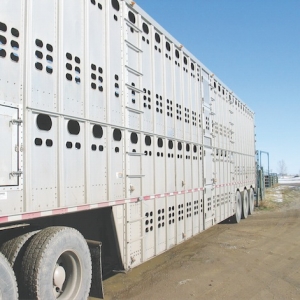 THE LONGER calves travel on a truck, the more weight they lose, Canadian research published in the Journal of Animal Science shows.

A team from the University of Saskatchewan found average weight loss on long, up to 23-hour trips was 4.5%, falling to 1.6% for 11-hour journeys.

Calves in compartments where higher temperatures and humidity were recorded had higher weight loss than peers in cooler, dryer compartments on the same trip.

The researchers evaluated 2,238 beef calves in 24 commercial loads from auctions or single sources to feedlots between September 2010 and November 2012 in Alberta. Ear tags with devices to record temperature and humidity were used on calves, with similar data loggers fitted in various parts of the trailers: deck, doghouse, belly, and back, as well as on the driver’s and passenger’s mirrors to record ambient conditions.

Drivers logged cattle conditions before the journey, at stops and at destination. Calves were weaned 24 to 48 hours before transport and had access to hay and water between weaning and transport. Stress was measured before and after transit through salivary cortisol levels, weight loss and morbidity.

Calves transported in summer lost more weight (“shrink”) than winter movements but salivary cortisol levels were higher in winter. Researchers found that despite elevated stress levels most animals arrived healthy and in good condition. However, because of the stress recorded, the authors suggest further research should be conducted on the relationship between transportation and cattle welfare.

“The influence of transport did not result in poor welfare within the study population, but may be of importance for higher-risk cattle.”