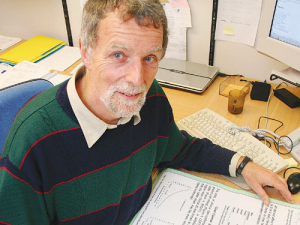 Dairy farmers and workers must take extra precautions because a newly discovered strain of leptospirosis is not covered by a vaccine.

A vaccine for the new strain should be developed in three years, says Cord Heuer, Professor of Veterinary Epidemiology and Infectious disease at Massey University.

Meanwhile, dairy farmers need to keep vaccinating because the current vaccines still protect against the common forms of leptospirosis.

But extra handling precautions are needed particularly by dairy farmers and workers. Data analysis has clearly shown they are getting infected by the new strain.

It has also been found in beef cattle – it is particularly a cattle disease – and to a lesser extent in deer and sheep.

Heuer says more information is emerging as they analyse the data and do research. A new strain creates uncertainties particularly for dairy farmers and workers, he says.

“This new strain is not included in the vaccine and existing vaccines do not provide cross protection,” he explained to Rural News.

“The strain has probably been emerging for 30 years. Nobody knew about it because there was no investigation being done because everybody thought dairy herds were safe because they vaccinate.”

The strain is in at least 70% of dairy herds; about half of herds are likely to have shedding occurring. About 27% of dairy cattle are testing positive for shedding.

“We only tested a small fraction of the herd.  By and large the new strain is found in 75% of the herds and in 16-17% of the animals nationwide. That is as it stands at the moment.”

People working on dairy farms are particularly at risk because of twice-daily contact with urine.

“Farmers need to take precautions despite using vaccines,” he says.

“The current vaccines protect against the most important and most widely distributed strains effectively. All the shedding we have seen was not related to any of the vaccine strains. The vaccination is very protective.

“It is important farmers continue to use the vaccines.  If they don’t then the risk explodes.”

Heuer says they have analysed the data from the ESR (Institute of Environmental Science and Research) on leptospirosis notified cases which are only “the tip of the iceberg”. About 10-15 minor cases occur for every notified one.

“Those notified cases had dairy farmers among them and no one had analysed the data. That information was sleeping there and nobody paid any attention – it said farmer, meat worker or others.

“Everyone thought dairy farmers were protected. We analysed the data and found dairy workers among them.

“A study in Waikato published by the district health board there worked out how many of the affected dairy farmers were due to the new strain.

“Even though the numbers are small, there was a significantly higher portion of dairy farmers being infected and notified with this strain.” The number is greater than has emerged among other farmers.

“That is pretty dramatic and the data is crystal clear; we hardly ever get such clear data from surveys. Surveys come up with trends but here the findings are so significant with this one particular strain that we are surprised. We didn’t expect that.

“This disease is transmitted through urine: it gets in the eyes, it’s in the air and gets through the skin. Dairy farmers deal with urine twice a day.”

Results from 4000 sheep, deer and beef cattle show that beef cattle are just as positive for the new strain as dairy cattle.

“These are animals that have antibodies against the new strain -- they have seen the bug. With this strain they carry the antibodies but they also carry the bug, and off and on shed it in their urine. If they have high levels of antibody they are more likely to shed the bug.

“Normally with antibodies you have protection, but not with this one; it’s a dormant thing sitting in the kidney cells, being protected not being harmed by a cellular defence mechanism. Often they multiply and you find them in the urine.  It is a clever bug that survives well in kidneys for a long period of time and then off and on it sheds.”

Beef farmers are much less exposed to urine than dairy farmers but should be careful when handling. Sheep farmers should take precautions when docking or lambing.

“Just about every farmer in New Zealand knows about this disease but often people are not paying any attention.”

Sheep farmers generally don’t vaccinate for leptospirosis at all because costs are too high; about 15% of beef and deer farmers vaccinate.

Production loss from leptospirosis in general is prominent in deer; also in sheep and beef to a lesser extent. It causes about 11% of all abortions in beef cattle and can cause huge foetal loss in sheep flocks.

It can flare up after floods; lambs dying with blood in their urine is an indication. “It survives in the soil, water brings it up to the surface and then animals drink it and get infected.”

- Vaccinate: keep vaccinating against the Hardjobovis and Pomana strains because they are effective.

- Protection: protection methods are needed because the new strain is not covered by vaccine. The disease is carried in the animal urine. Don’t smoke with contaminated hands, wash hands, cover cuts, use protective gear and visors if available; don’t get any urine in eyes or nose or mouth. Don’t get complacent about personal hygiene.

- Beef cattle, sheep and deer can also carry the strain and protective methods should be used when handling.

Funding is being sought and further research carried out to isolate the new leptospirosis strain, Heuer says.

They need to describe the DNA sequence and help the companies to add this particular strain to the vaccines.

“It will take time because authorities have to isolate the right strain; it has to be added to the vaccine which is an expensive process; they have to be registered and approved.

“That will take a minimum of two years after they have found it. They have tried to find it but they had difficulty culturing it so they will probably have to change lab procedures.”

There is initial seed funding by three companies and the Government will be asked for more funds. About 1000 samples will be taken from abattoirs.

Heuer says it is hoped genome sequence will be described this year; then it takes up to two years for companies to obtain a licence vaccine. The problem could be solved within three years.

But the lesson learnt is to keep watching for newly emerging strains.

“There may be a particular strain that is subject to climate change. Wet and humid summers like this are particularly conducive; floods are extremely conducive.

“We need to do these things so we don’t have another gap of 30 years during which a new strain is creeping up, infecting people and making them ill and nobody knows about it.

“With this new strain we have to act and the companies are keen to fit this niche because the one who comes first gets the biggest share of the market.”