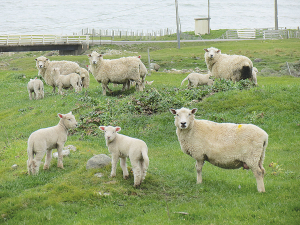 Metabolic diseases primarily affect ewes in late pregnancy and sometimes early lactation. These can have a huge economic impact on a farming operation - especially if there are large losses of capital stock. In the first of two articles, we take a look at pregnancy toxaemia.

These usually fall into the categories of either under nutrition or stress, for example:

Not all of the symptoms listed will be evident in all cases. Early stages:

The treatment of pregnancy toxaemia is difficult and produces variable results. Early treatment is the most important factor in a successful recovery. Once the ewe shows severe clinical symptoms or becomes cast then renal (kidney) failure has probably occurred and recovery is unlikely.

Treatment involves provision of carbohydrate such as oral propylene glycol or intravenous dextrose. There are several solutions on the market which contain carbohydrate and other nutrients to aid the synthesis of glucose.

Maintaining appetite is very important — if the ewe starts to graze voluntarily then full recovery is more probable. It is important to leave affected ewes with normal ewes to encourage feeding, although adequate shelter is also required.

Managing dehydration is also important and drinking water must be made available. Fluids can also be administered either orally or intravenously (a more expensive option).

Managing dehydration is also important and drinking water must be made available. Fluids can also be administered either orally or intravenously (a more expensive option).

Caesarean section (performed by a veterinarian) reduces the metabolic demand of the foetus. This is more successful in the early stages of the disease.

Providing adequate nutrition for pregnant ewes is the most important factor in preventing pregnancy toxaemia. The main guidelines for prevention are as follows:

Base feeding levels on scanning data and the use of pregnancy feed tables.

Note that inclement weather raises the energy demand of ewes, especially if they have been shorn before lambing. Provide adequate shelter.

Have supplement reserves and a plan ready to feed stock as early as possible following a storm.