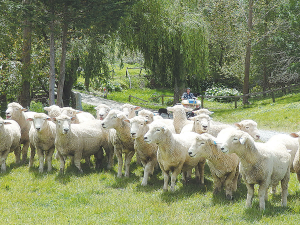 Ensuring rams are in peak condition prior to mating will help maximise their performance.

Ensuring rams are in peak condition prior to mating will help maximise their performance and their contribution to the genetic improvement of the commercial flock.

Beef + Lamb New Zealand's Sarah Powdrell says, well before mating, rams should be fully vaccinated for all conditions of local significance - including salmonella and clostridial disease and be treated for any trace element deficiencies.

Selenium is particularly important as deficiencies can result in sperm defects.

Rams should be shorn at least eight weeks before mating. Crutching maybe also required closer to mating to clear the testes of wool, ensuring they don't get too hot.

Like ewes, rams should be at a Body Condition Score of 3-3.5 and on a rising plane of nutrition going into mating.

For rams that have been in the team for more than a year, they should be checked for abnormalities in the scrotum and testes and vet-checked for scrotal mange. The latter can render rams infertile by increasing the temperature of the testicles.

Feet and mouths should also be checked to ensure soundness and mobility. Foot abscesses can elevate a ram's body temperature and cause infertility for up to two months.

After mating, a second health check should be carried out and any issues addressed. Young rams or older rams with a sub-optimal body condition score may need a drench.

"Best practice is to carry out a faecal egg count to determine whether drenching is necessary," Powdrell explains. "In principle, rams should not need drenching if ram ratios, preparation, management and feed during mating were optional."

After mating, rams should be fed so they return to their pre-mating body weight within six wees.

"Don't forget about them. They are one of your farm's best assets so look after them so they can do the best for you."

Heat stress in dairy cattle is probably the most overlooked seasonal problem here in New Zealand.

'Pig' of a new welfare code

NZ's pig farming sector believes if a new draft welfare code for pigs is adopted it could spell the end of the country's pork industry.

The Legacy Sale, dedicated to family and destined to give back, has done just that.