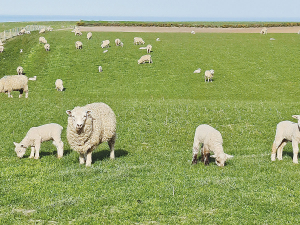 It is recommended to check ewes' udders 4-6 weeks after weaning in order to find the maximum number of affected ewes.

Around 5% of ewes in New Zealand have problems with their udders (udder defects).

These can lead to reduced lamb survival and growth rates. It's a good idea to check udders 4-6 weeks after weaning so that affected ewes can be identified and culled.

Studies on lower North Island farms have shown that 2-7% (average around 5%) of mixed-age ewes have udder defects. The lambs that are born to ewes with udder defects will have a reduced chance of survival - their death rate is 3-4 times higher compared with lambs whose dams had a normal udder.

Lambs that do survive grow an average of 25g less per day so their average weaning weight is around 2kg lighter than lambs whose dams had normal udders. Because of these effects, ewes with udder defects will wean around 11 less kg of lamb compared with ewes with normal udders.

This is probably due to post-weaning mastitis and possibly also because it is easier to feel some defects once the udder has dried-off. In research studies it has been found that checking ewe udders a few weeks prior to mating (rather than at weaning) is a better predictor of how udders will affect lamb survival and growth for the coming season.

It is therefore recommended to check udders 4-6 weeks after weaning in order to find the maximum number of affected ewes but still have time to finalise ewe numbers before mating.

Generalised hardness of the udder would often be called mastitis.

If the infection is recent the udder will be hot and swollen.

However, more commonly, the infection has been there for some time and the udder half or halves will simply feel very hard all over. If the affected udder half is 'milked' by gently squeezing the teat, in recent infections the secretion might be watery, bloody or clotted.

If the udder has been infected for some time the secretion may be very thick and discoloured or there may be no secretion at all. Note that just after weaning the udder is often quite firm as it is full of milk, but an udder half with generalised hardness will be very firm/hard.

Ewes with generalised hardness/mastitis in one or both udder halves should be culled.

Some farmers wish to treat ewes with generalised hardness/mastitis in one or both halves of the udder. If the infection is in the early stages (swollen, hot) then treatment may be possible - contact your veterinarian for advice.

Ewes with gangrenous mastitis ("blue-bag") are usually also sick and should be humanely euthanised or treated immediately - contact your veterinarian for advice.

Typically, generalised hardness/mastitis is not found until after weaning and is usually a longstanding infection. Treatment is unlikely to be satisfactory and these ewes are usually best culled.

To check udders effectively they must be palpated (felt).

Just looking at the udder, during crutching or shearing for example, isn't effective. It is easiest to palpate udders while the ewes are standing in the race by feeling and gently squeezing both halves of the udder. If it is being done 4-6 weeks after weaning, if possible also roll the teats between your fingers.