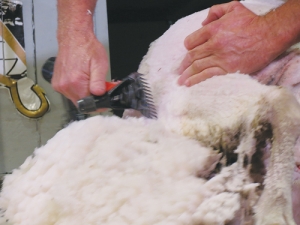 Extremist animal welfare group PETA’s campaign (Rural News, April 21) against the Australian wool industry has led to a number of advocacy groups in the sector taking action against its misleading promotion.

The furore surrounds an advertisement featuring Australian musician Jona Weinhofen clutching what appears to be the fake, bleeding body of a violently sheared sheep, carrying the slogan: “Here’s the rest of your wool coat.”

The advertisement was released in conjunction with video footage of sheep being treated poorly in shearing sheds.

PETA claimed the advertisement represented the “realities of the Australian wool industry” and that “25% of the world’s wool comes from Australia and it’s made from 100% cruelty”.

The advertisement, which aired earlier this month, has been met with outrage from many who believe the campaign is misleading.

“It’s in our own interest to treat our animals humanely, given good treatment means healthy animals and good productivity. All Australians should realise that PETA is all about portraying extreme behaviour as the norm.”

“Australian wool growers protect the health and welfare of their sheep through a variety of animal husbandry practices that are suited to the sheep type and the environment,” WoolProducers Australia said in a statement.

The campaign has prompted the VFF to lodge a complaint with the Advertising Standards Bureau, with its complaint focusing on the fake representation of the lamb as “misleading and offensive”.

But while some farming groups are pushing for the ad to be removed by bureaucratic means, the Western Australian Farmers Federation is instead campaigning to educate Weinhofen and PETA through a crowd-funding campaign.

WAFarmers launched its campaign to send Weinhofen to shearing school by aiming to raise $4500.

If it meets the mark, then WA Farmers president Dale Park says he would extend the invitation to the staff at PETA – including the chief executive and the marketing department – to clarify any misconceptions they may have.

“No one that I know would shear a lamb that size – it looks a day old – and certainly they wouldn’t tolerate such a low standard of shearing,” Park says.

He says the PETA campaign preys on people who have no knowledge of shearing practices. “Shearers are trained in best practice technique and any shearer that did that to a sheep would be out of a job.”