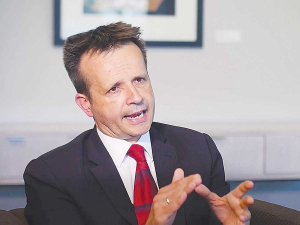 “We have two major global economies not getting on, that’s always bad news for small and medium sized economies that look for larger ones to lead the way or at least not stand in the way of progress in developing the international rules based system,” he says.

Vitalis made this comment during a global trade update webinar organised by Beef+Lamb NZ two weeks ago.

He says the trade war is creating more uncertainty and more risks out there for businesses.

There are some direct risks to NZ. He notes that the free trade agreement with China has been part of NZ’s growth story and helped us weather the global financial crisis.

He says key for NZ going forward will be how the phase one deal between the US and China is implemented.

“Are they going to buy more beef or sheepmeat from the US and what it means for displacing our own products?

“What preferential access they have into each other’s markets...those are the risks out there.”

Vitalis urged exporters to report any pattern of behaviour that caused market issues to MFAT.

“That’s the key focus for us over the next 12 to 18 months, to help exporters overcome barriers.”

Trump argued that unilateral tariffs would shrink the US trade deficit with China and cause companies to bring manufacturing jobs back to the US.