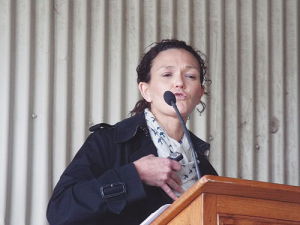 China remains the key to where the global marketplace is heading in dairy prices, says Westpac economist Anne Boniface.

Speaking at a recent Owl Farm focus day at St Peters School, Cambridge, Boniface said China’s growth had slipped from 6.9% to 6.3% in the past 12 months.

However, she believes Chinese consumer spending is still strong, with any economic slowdown due to a squeeze on credit for larger capital projects.

Boniface said that while fuel prices are high in New Zealand, the price of crude oil has dropped significantly to US$75 a barrel, contrasting with a 2009 average price of US$145. She predicted more falls to about US$60 by 2019, given likely supply increases including more North American shale deposits.

Boniface believes dairy cow numbers have plateaued, while productivity has improved, hovering just below 400kg MS/cow versus 260kg MS in 1992-93.

She warned the audience to expect rising costs driven by rises in insurance, freight charges, repairs and maintenance and wage costs. The latter are being driven by low unemployment, meaning staff are harder to find, prompting employers to offer better packages to suitable candidates.

On global milk flows, Boniface said supply is slowing in Europe and had “tanked” in Australia because of drought, but US exports are still increasing. Milk exports to the key Chinese market remained relatively flat, prompting questions about NZ’s domestic production.

China’s dairy herd is seen as shrinking, largely due to the winding up of small family farms with one-three cows, Boniface said.

“However, this ‘slack’ is being taken up by medium-large herds being established, but at a slower rate than the shutdowns, suggesting one-two years may pass before Chinese milk supply regains the status quo.”

She said that while the GDT price index continued to slip, this “re-modelling” of Chinese dairying would cause demand to hold. But she was pessimistic about whether the revised payout for the 2018-19 season of $6.25/kg MS could be guaranteed; $6.00/kg MS is more likely.

Boniface predicted that the next season “was likely” to see a rebound to $6.75/kg MS, based on slower growth in Europe and the US.

OPINION: The global market will be caught in the crossfire of China's measures to reduce its environmental footprint, with ambitious goals to be carbon neutral by 2060.