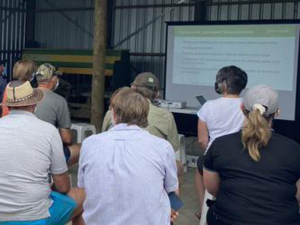 The workshops, which aim to improve farmers’ understanding of the Emissions Trading Scheme (ETS) and Zero Carbon Bill, help identify ways to generate a financial return from the ETS, localised tree-planting and land-retirement funding programmes.

“At the workshops, farmers learn about the integration of trees into pastoral-based farming systems, the ETS, and opportunities to offset greenhouse gas emissions,” says B+LNZ extension manager Maria Shanks.

“It’s important that farmers’ efforts are recognised through their planting programmes and these workshops help to unlock some of the economic benefits available to them. By the end of the workshop, they have a clear idea of which options are relevant to their farm business.”

Following successful pilot workshops in Bay of Plenty and Waitomo, the scheme was rolled out nationwide.

Shanks says the programme has received positive feedback with more than 100 farmers attending two workshops in Northland in May followed by 80 in the Bay of Plenty and Waikato in June.

“Farmers have told us they left the workshop with a clear idea of the options they want to explore further,” she says.

“We want to make sure farmers get the most out of the workshops and can get information relevant to their specific farming situation and circumstances.”

Rotorua farmer Richard Fowler, who attended workshops in Opotiki and Rotorua, encouraged other farmers to register and find out how the programme could benefit them too.

“It’s a complicated issue, and this workshop gives you a good insight of how to integrate trees into your farming portfolio for multiple benefits including financial performance,” he says.

“The workshop gave me a much better understanding of the ETS and how we can tap into it for our farm, so farmers should make the time to register.”

While B+LNZ is not anti-forestry, it has been calling for the Government to limit the amount of offsetting allowed through the ETS due to concerns over whole farms being sold and converted to carbon forestry, which has a significant, negative impact on rural communities.

“We know a lot of farmers are looking to integrate trees on farms, exotic and native, and that’s a good thing. Farmers know their land best,” says Shanks.

“It’s about planting the right tree, in the right place, for the right reason, and the Trees within Farms: Opportunities with Carbon Workshops really help with that.”

Beef+Lamb NZ is gearing up to keep farmers informed about the potential risk of foot and mouth disease (FMD).

The Emissions Trading Scheme can appear complex. Oliver Hendrickson explains how the scheme can benefit both landowners and New Zealand.