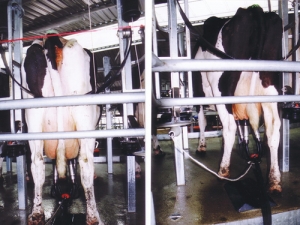 Saputo, of Montreal, says the policy applies to all its operations in Canada, the United States, Australia and Argentina.  And with all the zeal of the newly converted, Saputo wants to see its policies made accessible to all dairy producers and participating professionals in the world.

“Through these initiatives, Saputo reinforces its commitment to bringing industry leaders and dairy farmers together to improve animal care,” it says.

Saputo demanded the introduction of animal welfare practices before the milk flow resumed.  The new policy has MFA cheering.

“MFA praises Saputo for working toward ending some of the cruelest practices in its global dairy supply chain, such as tail docking and dehorning without painkillers, as well as curbing malicious animal abuse,” the group now says.

“With Saputo’s announcement, the days are numbered for dairy factory farms that beat and drag cows, and mutilate them without painkillers.

“It’s now time for Dean Foods, Land O’Lakes, and other mega dairy companies to stop dragging their feet and implement meaningful animal welfare standards of their own.”

The key elements include zero tolerance for any act of animal cruelty, eliminating tail docking in dairy cattle, and ensuring a minimum industry standard for pain control when dehorning or disbudding cattle.

Saputo is in the top 10 dairy processors in the world, is the largest in Canada, third in Argentina and fourth in Australia. In the US it is one of the top three cheese producers. It sells products in 40 countries.