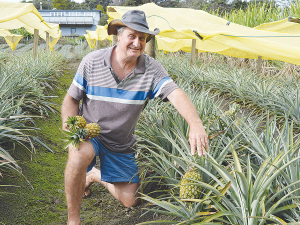 When Owen Schafli and his family - wife Linda and son Colin - decided to grow pineapples in Parua Bay, Northland 10 years ago, people were laughing.

"They said to me, 'no one has ever grown pineapples here before', and basically wrote me off," Owen Schafli told Hort News.

Today, he is having the last laugh. In summer, the family company Geneva Farms peak harvests 350 Queen variety pineapples a day, on what Schafli believes is New Zealand's only commercial pineapple plantation. During the cooler winter months, the daily harvest drops to around 50.

He says, after trialling pineapples for two years, they realised they could tolerate the climate.

"That's when we put in our first section of pineapples. We have now been growing them and expanding our commerical crop for seven years. We will only break even in two years' time."

The difference between Schafli's pineapples and those of the larger overseas growers is that when the commercial growers' pineapples reach a certain size they are sprayed with the hormone Ethephon, which induces them to flower over a six-week period and therefore all ripen at the same time.

"Mine are not sprayed, so I have them fruiting throughout the year," he explains.

Schafli's farm has 22,000 plants - mostly the Queen variety, a small gourmet fruit that is sweet and deep golden yellow with an edible core. The Cayenne variety is mostly imported into NZ.

The fruit is sold at the local farmers market and sell very well. Schafli has clients who buy one of two pineapples from him every week.

He told Hort News the Northland weather is good for pineapple growing but a prolonged drought can affect fruit quality.

Last year's crippling dry, between November 2020 and January this year, did some damage to his crop.

"They can take a bit of drought but during the summer period they need a bit of rain."

A South African immigrant, Schafli moved to New Zealand with his family in 2008. After two years in Hamilton, they bought a 6.8ha property at Whangarei Heads to grow bananas and pineapples.

He says growing pineapples isn't for the fainthearted.

"The pineapples are hand planted and it is hard work but it keeps me fit and healthy. And it's not a produce that will make you rich quickly."

The pineapples are spray free, they all flower at once and take six weeks to mature. Peak harvesting season is around April and May.

It's taken seven years for Owen and Linda Schafli to build up numbers of their Queen pineapples from suckers. Pineapples will grow from suckers that sprout from the side of a mature plant.

While bananas and pineapples are flourishing, Schafli has also been experimenting with other tropicals - such as dragon fruit, papaya, sugarcane and coffee.

Bananas have been their cash crop, but they don't have enough plantable land for them to be commercially viable.

"We decided to focus on pineapples once we knew they consistently fruited well here. They make the best economic use of our small sloping property."

"We're investigating supplying pineapples to local restaurants and cafes, and later may look at other outlets around the country," he told Hort News. "People are really enthusiastic about exploring new food options we can grow here in Northland, and we encourage anyone to experiment at home."

Northland banana grower Hugh Rose enjoys every minute of planting and promoting the tropical fruit to other farmers.