Field days showcase the rise and rise of Māori farming 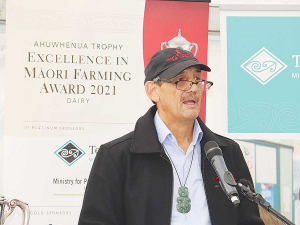 It's that time of the year when the country's top Māori dairy farms claim the spotlight as part of the prestigious Ahuwhenua Trophy competition to determine the winner of this annual event. For the last two weeks field days have been held at two of the three farms in the competition and as Dairy News goes to press, a third one is taking place.

A field day at Tataiwhetu Trust's organic dairy farm in the Rūātoki Valley south of Whakatane just before Easter attracted more than 180 visitors including a number of VIPs.

Tataiwhetu Trust is one of three finalists in this year's prestigious Ahuwhenua Trophy for the top Māori dairy farm.

Guests at the field day included the Minister of Agriculture, Damien O'Connor, the Minister for Māori Development, Willie Jackson, and the Associate Minister for Agriculture, Meka Whatiri. Also present were rural professionals, central and local government officials, and farmers throughout the Bay of Plenty.

The visitors were welcomed on to the Tauarau Marae by local Māori dignitaries including the chairman of the Tataiwhetu Trust Trust, Paki Nikora. After the welcome and a series of presentations, guests were taken on a brief tour of the farm. Tataiwhetu is an organic dairy farm milking once a day and their herd of 432 kiwi cross cows produce 129,140 kgMS. They also carry 188 replacement stock on their two support blocks.

Kingi Smiler, chairman of the Ahuwhenua Trophy Management Committee praised Tataiwhetu Trust for their field day. He says organising this event and completing all he other tasks associated with entering the competition requires significant effort and commitment on the part of Trust members and staff.

Kingi says they did an excellent job showcasing the rise and rise of Māori dairy farming and hopes that other Māori farmers will take note of this and consider entering their farms in the competition in future years.

"It is great to see Māori farms in the Eastern Bay of Plenty come to the fore in the Ahuwhenua Trophy competition.

"They are answering the call of Sir Apirana Ngata and Lord Bledisloe from 88 years ago to create better farms that serve their whānau well financially while at the same time enhancing the environment," he says.

O'Connor says it was great to get out of Wellington and spend a day seeing yet another example of excellence in Māori farming. He says the field day at Tataiwhetu Trust's organic dairy farm shows the vision and the positive steps Māori are taking to gain ownership of their lands and to develop them so that they are both profitable and sustainable.

He says they along with the other finalists in the dairy competition, Pouarua Farms and Tunapahore B2A Incorporation, are living the vision of Sir Apirana Ngata and Lord Bledisloe by developing their lands to their potential and becoming role models for others.

"The government and I personally recognise the huge contribution that Māori agri business make to the New Zealand economy and for leadership that it shows in the sustainability space. It aligns with our 'Fit For a Better World' roadmap.

"By doing this, Māori farmers are making a significant contribution to enhancing the provenenance of out products internationally. It is especially grea to see more Māori product brands appearing in our overseas markets," he says.

O'Connor says the primary sector needs to go not only from volume, but also volume to values. He says consumers now days are looking for healthy nutritional food products that are proven to be sustainably produced.

"They're inherently interested in the values with which food and fibre is produced. Māori farmers are well placed to meet the expectations of these consumers," he says.

A field day for a third finalist - Tunapahore B2A Incorporation - will be held on Thursday. The national winner will be announced at a dinner in New Plymouth on Friday May 14.

POUARUA FARMS is one of the other finalists in this year’s competition.

It’s the largest single dairy platform in the Hauraki region with a 2,200ha platform comprising ten farms: nine dairy units and one drystock unit. A total of 4,600 cows are milked and approximately 1.65M kgMS is produced on the farms. The properties are jointly owned by Ngāti Maru, Ngāti Paoa, Ngāti Tamaterā, Ngāti Tara Tokanui and Te Patukirikiri and were bought back from the government as part of a treaty settlement buyback scheme. The farms are now fully operated by the iwi owners under a limited partnership arrangement with a board of highly experienced directors.

The farms are typical of the region – flat and featureless with peaty soils which dry out in summer and which requires careful management.

There has been considerable capital investment on the farms with an emphasis on both the milking platform and the environment. This includes a large riparian planting programme and the recent construction of a new 54 bale rotary dairy shed on Farm A where the field was held.

More than 160 people attended their field day where they heard presentations from the directors and staff of Pouarua. They were then taken on a brief farm tour to see some of the developments.

Pouarua Farms chief executive, Jenna Smith, says it was a huge task to pull the day together but says everyone from directors, senior managers and farm staff worked well together. She says the feedback from the day was positive with people interested in some of the wider innovations taking place on the farms. She says the land is very delicate and susceptible to environmental pressure and so they have come up with a vision – healthier food for a better life.

“That is that not necessarily all dairy because it may not be right to continue in dairy and so we are looking at other options for the land. For example, we are pretty heavily down the line on a blueberry orchard and have retired some land that we will use to graze beef cattle on when we have the feed to spare. We are also growing maize to sell,” she says.

Jenna Smith says dealing with the summer dry has been a challenge and to help mitigate that they are using Italian ryegrasses and conserving that in the spring and also have a good summer cropping programme including using an early maturing turnip.

“We then get into later maturing turnip which takes us through past Christmas and follow that with a sorghum, which has been drilled in behind those early maturing turnips,” she says.

Rick Braddock has been a foundation director of Pouaua Farms. He says it’s great to see Maori farming in such a responsible way and adopting such high sustainable practices including caring for staff.

He says there is a good culture in the company and they have done things to make the business attractive for staff.

While the company is looking at diversification with this goes a focus on the customer says Braddock. He believes consumers are concerned about the food from a nutritional point of view and also the provenance of that food.

“To that end we have set aside an area of the platform to supply Lewis Road Creamery with A2 Jersey milk and that is currently in our owns bottles on supermarket shelves in Auckland,” he says.