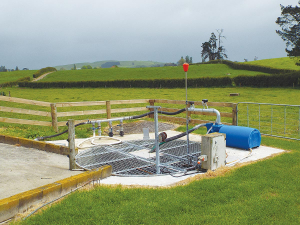 Dairy farmers are realising that having significant on-farm effluent storage can have many advantages.

Depending on individual circumstances, this might include removing the need to irrigate or risk of ponding in wet weather, using effluent when plant uptake is maximised, storage capacity during breakdowns or reducing labour requirements or stress during busy periods.

The System 2 spring calving herd are fed around 60 tonnes of imported PKE, supplemented by 4.5ha forage maize, all fed in the paddock. The farm has a flat to rolling contour, with soil type that varies from Kereone silt loam(well-drained), through Morrinsville clay loam (moderately well drained clay over loam) to Waitoa silt loam (poorly drained loam over sandy loam).

The de Groot’s storage capability centres around an 850,000L, above-ground Kliptank positioned on a high point around 250m from the dairy shed and silage pad. Installed in 2016, the tank is constructed from a polypropylene liner, HDPE walls and PVC uprights, with multiple agitation points around the lower circumference.

In operation dairy effluent travels through a sand trap to be collected in an in-ground 20,000L concrete tank acting as a sump from where it is sent, using an 11kW pump, direct to a travelling irrigator or to the storage tank. At the storage area, a PTO driven pump is used for sending material to the irrigator, as well as being able to re-circulate fluids to reduce sediment and keep micro-solids in suspension

The effluent field allows spreading over 23ha (5 paddocks from sump and 5 paddocks from storage) typically spread at around 19mm depth, delivering 85kg N/ha with an estimated fertiliser value of 0.45kg N/cubic metre. Currently, the effluent block is showing very high levels of potassium (K) at 41MAF units, compared to a range of 7-13 MAF units on elsewhere on the farm.

De Groot says, “We chose the Kliptank because it is relatively compact, is tidy and didn’t require the extensive groundworks needed for an in-ground system. Although it’s unlikely, the tank can also be dismantled and taken with us.”

Just a few kilometres away, Mike and Louise Wilson are equity partners/sharemilkers with Mike’s parents on Paratu Road.

Running to 135ha, the farm carries 410 milkers at peak, producing 170,000kgMS (1260kgMS/ha, or 415kgMS/cow). The property is predominantly well-drained Kereone silt loam, with a small area made up of Topehaehae clay loam (poorly drained loam over clay).

Described as a System 3 operation, the spring calving herd is offered in-shed feeding and has no feed pad, with access to forage maize and around 7ha of chicory.

The effluent system sees material passing through a small sand trap to remove solids that in turn leads to a 25,000L in-ground sump and an additional 20,000L concrete tank to deal with peak flows. From the collecting tanks, effluent can be pumped directly to pasture or into a 500,000L storage bladder situated on a fenced off level storage area adjacent to the dairy shed.
In either scenario, pumping is taken care of by a Yardmaster, 4-stage, 18.5kw pump, although power constraints on the site mean it cannot run during milking.

At the centre of the system a gravity operated G-valve is installed to ensure there is no back flow from the bladder to the sump if the pump is not operating. Rainwater can be diverted away from the effluent stream when the yard areas are clean -- an important consideration as the surface areas of the yard, roof and surrounding areas amount to 860sq.m, adding 8600L in a 10mm rainfall event.

The effluent area amounts to 40ha, complemented by the 7ha chicory sown area during summer. The latter allows a full bladder of 500,000L to be applied at a depth of 7mm.

Wilson makes the most of the latest technology available, employing a Williams travelling irrigator with cannon that is fitted with a pressure sensor, effectively creating an auto-shutoff feature. This is triggered by low pressure, suggesting a leaking hose, or high pressure triggered by a blockage or the end of the irrigator run. In either case, Wilson is notified by a text message to alert him of potential problems.

The cost of the system, largely installed in the last year, includes the storage bladder at $40,000, the travelling irrigator at $8000, the multi-stage pump at $12,000 and the G-valve at $3000. Earthworks were carried out using on-farm labour, with a minimum amount of substrate for siting the bladder.

Wilson comments, “The system just gives us so much peace of mind, particularly in extended periods of rainfall, while the technology keeps us informed about the system status. It also allows us so much flexibility particularly at busy times like calving or silage making: we just divert to the bladder until we have the time to irrigate.”