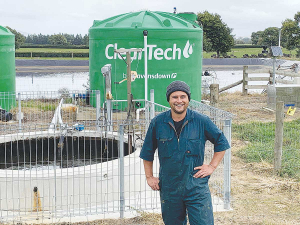 Lincoln University Professor Keith Cameron, who developed the system with colleague Professor Hong Di, says it reduces leaching by more than 90%, and up to 99.5% for some forms of phosphate.

ClearTech is designed to be installed between the dairy shed and effluent pond, intercepting and treating farm dairy effluent (FDE) with a coagulant to remove the solids.

The result is clear water which can be reused for yard washdown or irrigation, and a separate stream of more concentrated residue which goes to the effluent pond to be eventually spread on pasture in the usual manner. The system saves water, reduces the need for effluent storage and greatly reduces bacterial content in both the clear water and residue streams.

Earlier research had already shown that it changes phosphorus in the effluent into a less reactive form, and it has now been confirmed that it also reduces leaching because the coagulant binds to dissolved phosphate and only gradually releases it in the soil.

Cameron said that, of two recently-published research projects, one revealed the role of untreated FDE in producing phosphate leaching, while the second showed ClearTech’s ability to reduce it.

The first study, led by AgResearch’s Professor Richard McDowell, analysed 14 years of data from Lincoln University dairy farm lysimeters and concluded that significant P losses occur from certain soils even when FDE is applied according to regulations and following good practice guidelines.

It found phosphate losses of about 1.5kg/ha/year on areas where effluent was spread, versus just 0.25 for similar soils on non-effluent areas.

Cameron said they hadn’t realised how significant the effect was until they had analysed the data.

Then, a lysimeter trial conducted by Honours student Chris Chisholm in 2019 found that by using ClearTech-treated effluent, total phosphorous leaching losses were reduced by just over 90% and dissolved reactive phosphate (DRP) leaching by 99.5%.

“How excited could we be with that?” said Cameron.

“It’s astounding really when you think of it, that risk can be reduced by such a large amount.”

Phosphate leaching was not an original target of the ClearTech project. The research emphasised a benefit of ClearTech “that we had not really anticipated,” said Cameron.

LIC’s Innovation farm at Rukuhia, Waikato, has had a ClearTech installation running for about two years.

It gives him the luxury of a lot of clean washdown water without denting the farm’s bore allocation.

“We’re able to send the gates around to wash the yards more than twice to get everything off, nice and clean.”

Riwhi says they also use it to wash down the feed pad, instead the green water straight from the pond which they previously used.

The LIC Innovation Farm installation hosts one of Ravensdown’s two pilot plants, along with the Lincoln University Dairy Farm.

Cameron said LUDF saved a million litres of water in just the first seven weeks of the current season.

That means about 89 fewer irrigation runs a year, with considerable flow-on savings in pumping and labour costs.

Treating effluent while the sun shines

Handling the challenges of effluent management could become easier with a new product that allows dairy farmers to treat their effluent systems as a routine part of weekly milking shed maintenance.