Politics out, in with calving and cows 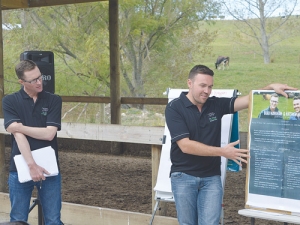 Matt Herbert and Brad Markham at the field day.

Moving from the corridors of powers in Australia to the hill country of northern Waikato can be daunting for anyone.

But for Brad Markham (35) and Matthew Herbert (26), the career change was well thought out and they are enjoying being part of an industry feeding the world.

Their efforts have paid off, with the pair winning the Auckland/Hauraki Share Farmer of the Year award.

Markham, a former political journalist and Herbert, a political staffer, met in 2008 while working for rival Australian media outlets. Markham grew up on a dairy farm in Pukekawa in northern Waikato.

In June 2014, they decided to become dairy farmers and moved to Pepepe, 30km west of Huntly to contract milk 260 cows for Markham's brother Lee.

The 92ha (eff) farm comprises flat, gently rolling and steep contours; Markham and Herbert milk 260 cows and are on track to produce 100,000kgMS this season, 7000kgMS more than last season.

Split calving means calving is done late March and early July. Herbert says this means both of them are always on the go, mating and calving throughout the year.

Split calving has also imposed a steep learning curve on the duo.

"We have been here two years; we have done four calvings, four matings and four lots of raising calves. While some say split calving is for the clinically insane, it has been a great experience for us."

The farmers' key goal is to achieve more days in milk for the autumn herd.

"When the payout's low farmers find it easy to dry off herds early," Herbert says. "But if you dried off after 250 days in milk and the cows could go on and milk for 280-300 days, that's a loss."

Markham told a field day at the farm recently that they were drawn to dairy because of progression opportunities.

"An opportunity came up for us to move over here," he says. "We believe in the dairy industry if you work hard you can go places -- build a multi million-dollar business in your lifetime. You can't do that in many other industries."

They now aim to operate a financially and environmentally sustainable dairy business in the region's top 10%. They also want to secure a 300-cow 50% sharemilking position by the 2018-19 season.

"We've actively chosen to be dairy farmers. We've career changed and haven't just fallen into this career by default. We're passionate about our animals and about being a part of a system which feeds people across the world," Markham says.

To move a step closer to their 50/50 sharemilking goal the two men will move to a Taranaki farm in June. They will contract milk 380 cows through a 54-bail rotary with ProTrack for Andrew and Vanessa Dwyer.

Markham says they plan to start building their herd by buying young stock.

Markham and Herbert's budgeting skills were also noted by the judges who said it will provide a very good base for their growth.

They use DairyNZ budgeting templates, modifying them to be more relevant to a contract milker.

They do monthly cashflows, entering actual spending. "This way we can closely track how we're progressing and find any major variances," Markham says.

"We also stock up on items when they're on special, like filter socks and rubberware; we bought our wet weather gear for next winter when RD1 had a two-for-one sale in the summer."