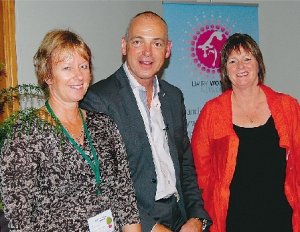 He told the Dairy Womens Network conference last week in Rotorua that the co-op was seen as greedy and opportunistic.

"We have great strength and great opportunity but media [portrayal of] Fonterra is kind of disturbing... Fonterra is not feeding the nation, we are ruining the environment, polluting, and we are seen as being greedy and taking the wealth off the country and not sharing it.

"We have to change that [perception of us being an occupier] to a kind of stewardship," grabbing opportunities for the future and also "changing our attitudes and how we are perceived."

After outlining his global and marketing strategy, Spierings later said his problem with Fonterra was that it may be doing well, "but there's kinda no pride."

Milk for Schools, which last week started with a Northland trial, was intended to build pride and "maintain the right to grow."

"We need to be seen as a co-op that cares – to change that [perception] from occupiers of New Zealand to being stewards. We have to connect back to our people."

It started with Milk in Schools because children were turning away from milk and turning to Coke. Different initiatives are being put forward on water and hygiene to "bring pride back to our country."

Fonterra is "almost too big for the country," Spierings says. "What the All Blacks do well we want to improve on.

"With the All Blacks there was a sense of ownership by the whole country; the country did not have a financial stake in the All Blacks but it did have an emotional one.

"The general public looks at dairy farming as a lot of money going to a few."

He does not believe in sharing Fonterra's capital base with the country, but an emotional base. "There are lot of ways of sharing wealth without touching equity."

A member of the audience asked how he proposed to take the shareholder base with the company under this strategy. "How will you get the people here energised to get that emotional ownership?" she asked.

Spierings said Fonterra needed to connect with central and local government and the community. But the co-op first needed to clearly work out where it wanted to make a difference in the community – rather than ad hoc involvement – then get the shareholders onside.

He says a Sky broadcast this week will be part of a phased communication plan. Every month or two another deeper level would be released, phased so shareholders can digest it, with lots of examples. There will be discussion about what to do in nutrition, water and hygiene.

Another audience member said although farmers accepted they needed to do Milk in Schools for social responsibility, they still thought the public should accept it was coming out of their profit.

Spierings said Fonterra found while setting up the pilot scheme in Northland they connected with a lot of farmers.

"It's not charity; our farmers are part of the country. We have to be important players in the country.

"We were losing consumption over the whole country... we are losing our children, we have to do something."

Nominations for the 2020 Fonterra Dairy Woman of the Year awards have opened.