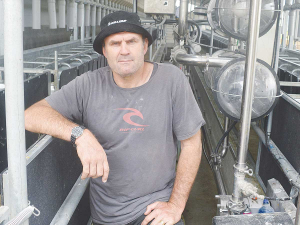 SBL owns a 236ha (215 effective) farm in Te Aroha West, which started as a small farm bought nearly 100 years ago by Schuler’s grandfather who came from Switzerland. Over time, five other neighbouring farms were acquired for milking cows.

This year, the business decided to dip its toes in sheep milk.

From late August, 640 ewes have been milked in what was an old cow herringbone shed. It now boasts a new Rapid Exit Milking System fitted by Waikato Milking Systems.

While the conversion project was delayed due to Covid-19, the ewes have been milking for over a month now and Kevin is pleased with how things are going.

“We aren’t too worried about the milk yield this year, we know there will be good genetic advancement and longer lactation going forward,” he told Dairy News.

“Next year will be a more normal year for the sheep milking operation and that will be a real measure of our success.”

Maui Milk, which takes sheep milk from the farm, is paying its suppliers $17/kgMS. Kevin says that is an outstanding payout.

He says the recent volatility around cow milk payout has created uncertainty for the dairy cow industry.

“We know what our costs are but we don’t know what Fonterra’s payout will be,” he says.

“One element we have sought around diversification is creating stability. We supply the Dairy Goat Co-op which has consistently delivered a strong payout. So this gives different strings to your bow.”

He notes that both Maui and DGC use milk for infant formula products rather than commodities.

“For us it’s about moving out of commodities; ultimately you get into business to have good cashflow and make profit.”

This year the Schuler Brothers farm has allocated 40ha for sheep, 70ha for goats and 105ha for cows. About 45ha of support land is used for growing maize and running young stock.

Kevin says being able to create smaller farms forms part of the succession plan for the family business.

“When we look at the future, we think there will be less buyers for big farms, and smaller 40 to 60ha farms will be more affordable and appealing. Sheep and goats make this scale of farm possible.

“If we decide to keep it in the family, that will be great but we will have no problems selling smaller efficient farms.”

The lower environmental footprint of goat and sheep milking is also a factor.

“We love our cows but indications are there about the lower carbon footprint of goats and sheep and this puts you in a better space as well.”