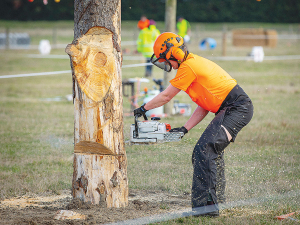 "I saw it as a case of 'I've got nothing to lose so I'll get stuck in' instead of being a spectator and watching all the other competitors have all the fun," he says.

The ANZ relationship associate won the Taranaki Manawatu Regional Final and represented the region at the grand final in Christchurch in July, eventually bringing the title home.

As a former dairy farmer and researcher for Dairy Trust Taranaki, he said he completely failed the wool module in his first taste of the district contest.

"I definitely walked away having learnt a thing or two, including how to put the lid of a beehive on properly on the top, not the bottom," he says.

His advice to all New Zealand Young Farmers (NZYF) members was to grab a mate, sign up for the district contest and personally challenge each other to see who will do better.

"Districts are a lot more low-key so the competition would be within all of our member's skill sets and I'd encourage everyone to give it a go," he said.

"You're not going to embarrass yourself and if you don't know about something, you will get taught on the day, so at least you walk away from the day having learnt something like I did," he said.

The coveted FMG Young Farmer of the Year 2022 contest will be kicking off with a roar on October 9th for season 54's first qualifying rounds.

Sixteen district contests will be held across the country over October and November to select eight of the best competitors in each of NZYF's seven regions.

Seven regional finals will be held early next year, where the winner from each will proceed to the grand final to battle it out for the 2022 FMG Young Farmer of the Year title in Whangarei, in July.

District contests are hosted by an NZYF Club and involve half a day of practical challenges.

NZYF chair Kent Weir would love to see more member participation in the district contests to support the clubs who volunteer their time and energy to convene the competiton.

"This is the perfect time to enter yourself, your clubmates, your workmates and even your partners into the district contests to have a bit of fun and earn a cold one at the end of the day," he says.

"It's a good opportunity to not just test yourself and benchmark yourself against your peers, but a chance to meet new people, connect with the community, potentially learn a thing or two and get off the farm and socialise with others in the industry."

Having been a NZYF member for nine years, Weir says he knows all too well the banter that happens in clubs and agreed with Jarman that sometimes the best challenge comes from your mates.

"Get all of your mates involved, have a laugh and find out who actually brings what to the table - especially seeing as districts are all about practical challenges," he says.

Getting home safely is the main thing