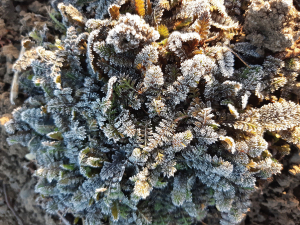 Research Viticulturist Raquel Kallas says the project results indicate the plantings were “passive”, with little or no impact on vine and soil water status, vine shoot lengths and pruning weights, vine nutrient status, vine yield or fruit chemistry. “Very few statistically significant differences were found, a positive indication that, overall, the undervine plants did not compete excessively with the mature vines for resources in year one,” she writes in her report.

That’s exactly the outcome Raquel was hoping for. “I wanted to see that the vine is behaving just as it would under normal management,” she says, comparing them to adults who’ve never had to share their living space. “Then a flatmate moves in and you could act like it’s ruining your life, or you could learn to live with a flatmate and share your resources,” she says with a laugh. “That’s how I feel about the vines having the plants under their feet – they will learn to live with it.”

Villa Maria planted Carex comans, Lobelia angulata, Leptinella squalida, Coprosma acerosa, and Coprosma acerosa ‘Hawera’ beneath the vines in the trial blocks, as well as two different mixes of cover crops consisting of clovers, fescues, brown top, plantain, sheep’s burnet, and alyssum. They were trialled in a Merlot block growing for Rosé wine and geared for higher yields, and in a Syrah block for super-premium wines from low yielding crops.

The Coprosma acerosa, a native coastal plant, was the only plant that significantly brought down yields in the Syrah, with yield per vine lower than the control by 1 kilogram at 2.2kg per vine.  “Cluster weight was also significantly reduced by 40 grams, to 109g/cluster.” The fruit grown amid the Coprosma was the ripest at 23.5 brix compared to the control at 22.6 brix, “while acids varied little across treatments”, says Raquel’s report. The Carex comans – a hardy tussock grass - was in general the second most competitive native in the vineyards

Meanwhile the Lobelia angulata was associated with an increase in yield compared to the control, although non-significant, says Raquel. The Lobelia was also the only treatment to increase vine water status and relative soil moisture compared to the herbicide control, although that was also statistically non-significant. It was also the plant with the lowest survival rate, at 84%.

“These are not hard and fast conclusions, but the tendencies observed warrant further investigation,” writes Raquel in her summary. “All other treatments brought the yield closer to, or exactly met, the manager’s commercial target when extrapolated to tonnes per hectare.”

Raquel says the choice of natives as an undervine crop makes perfect sense, to reduce herbicide use and return indigenous species to the “manipulated environment”. They are equipped to live in New Zealand conditions, so need little “coddling” along the way, and proved resilient to frosts, she adds.

The plants took hold in drought conditions – “we couldn’t have chosen a more challenging season”, says Raquel - and the biggest threat was rabbits, a problem exacerbated by the dry year. From the bunnies’ perspective, the natives “just looked like chocolate chip cookies sitting amid the vines”, she says. Her favourite plant - the Leptinella squalida - had a perfect survival rate, but was the one most favoured by the rabbits, with nearly a quarter of the plants damaged in some way. Because the rabbits dig for the roots, deterrent sprays were not effective, and a shooting and poison programme was used to mitigate the impact. While ridding the vineyard of an introduced pest has its benefits, that was a tiresome distraction to the project, she says.

Villa Maria is interested in continuing the trial, Raquel says, and hopes that will include quantification of “positive externalities”, such as soil microbes and beneficial insects, by third party scientists.

It’s about a holistic approach that looks at ecosystem services as a whole in order to avoid the need for a silver bullet “fix” says Raquel. “We’re running out of those.”

For the first time ever a New Zealand wine brand has been included in the top three Most Admired Wine Brands in the World, taking out the third spot.