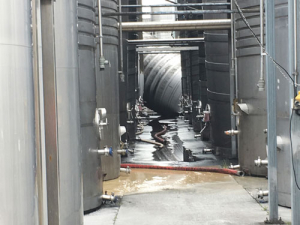 Following the Kaikoura earthquake two years ago, the people impact was the greatest priority for the Pernod Ricard Winemakers’ management team.

Tony Robb, Operations Manager South Island, who presented the company’s learnings at Bragato this year, says tanks can be replaced or repaired, there is always another vintage, “but people are your biggest asset and individuals can never be replaced.”

The damage incurred by Pernod Ricard Winemakers on the morning of November 14, 2016 was substantial. The 7.8 quake damaged the majority of tanks in some way or form which resulted in the company going into vintage 2017 with just 50 percent capacity. While there was no interruption to international markets, there were still some pretty significant outcomes.

So what were the learnings Robb took from the major event?

Immediately after the quake, he headed to the winery to determine what the damage was. Despite there being no power it was obvious that the site was a dangerous one. Wine was lost and tanks were crushed amongst rubble.

“I made a tough decision.” he admits, “We locked the winery up, we chained the gates so nobody could get in, and we left.”

He then had to contact his staff to let them know that they shouldn’t even think about coming to work the next day, the same with the viticultural staff. “I wanted them to make sure that their homes were okay and their families were safe.”

Not wanting to overload the cell phone network, he sent a text out to all staff members.

“I thought that was fine,” he says. “Five minutes later I was getting lots of responses. But I subsequently discovered nearly half of those texts took 19 hours to get through. So a lot of people were trying to get to the winery next day to see what was going on.”

Lesson one: Communication is key

The first big learning that Robb took out of managing the crisis, is the importance of great communication. He later realised that he could have sent emails to staff, via the Cloud, which would have ensured everyone was contacted. Since the quake, all members of the team have been supplied with a portable device, to ensure they can be contacted.

Robb says the number one thought on many employees’ minds when they saw the damage for themselves was understandably – will we still have a job?

“Obviously a big part of our communication strategy was; yes, we are going to rebuild, their jobs were safe and by the way, if we are standing you down for the next couple of weeks because it is not safe to be at the winery, don’t worry about money, we will continue to pay you. Our communications over the next six months focused on reassurance.”

Lesson three: Don’t let anyone onto the site until you have determined that it is safe

“We made the conscious decision that there was no way anyone was going into that space until structural engineers had said it was safe to do so. It was challenging to watch wine escape from our tanks - wine that we had worked on for months, in some cases for years and there wasn’t anything we could do about it.”
It was the right decision, as tanks, rendered unstable by the earthquake, continued to fall well after the initial event. “If we had put people into those spaces we would have been putting them at risk.”

Lesson four: Catwalks are extremely dangerous in an earthquake

“If anyone had been on that catwalk they wouldn’t have stayed on it very long,” Robb says. “I saw examples where catwalks were perfectly level after the quake, tanks were still upright, but everything that had been on that catwalk was on the ground metres away from the tank. If you were on that catwalk in a 7.8 event, do you think you would have been able to hang for the duration of the event?” (The quake lasted over 2 minutes.)

Robb says the company now believes, wherever possible, that alternatives to catwalks should be investigated, going forward.

“There are some risks associated with catwalks and with recent advancements in technology there are now some viable alternatives. These alternatives are being employed within new tanks being built for our winery, whether it is in Marlborough, Hawke’s Bay or Auckland.”

The new design, which Robb describes as a ‘smart tank’, has density meters to measure volume, they are able to communicate with other winery equipment such as filters and pumps, “essentially they can run by themselves.”

These tanks are being built with capacity up to half a million litres, and are all being fastened with the OnGuard Seismic Systems.

Instead of Marlborough’s winery taking the entire region’s harvest, Pernod Ricard Winemakers made the decision not to rebuild the winery to the previous size.

“We have built extra capacity into our other wineries instead and every year from now on, a portion of what we crush and press will be shipped out straight away and fermented in other regions, predominantly Auckland.”

Robb says Marlborough was initially cut off, with SH1 south closed for over a year.

The lessons learned in Marlborough have been shared with Pernod Ricard world-wide and have already been instigated beneficially by company wineries affected by last year’s Californian wild fires.

“In terms of communication, they had a much better system than we did, (because of the lessons passed on) so they were able to communicate with their staff quite readily. In terms of staff welfare, they applied many of the learnings we had made and as a result their staff felt the event was well managed and they were well looked after.”

“It is something to be remembered; learnings from these type of events, should be shared.”

Two years on from the devastating November 2016 Kaikoura earthquake, Kaikoura dairy farmer Graham Collins says he is getting used to “the new normal”.

Three months on from the huge November 2016 earthquake the badly damaged land on one farm near Waiau is still settling and moving – but the house isn’t.

Port Nelson has been a key infrastructure asset for the top of the south for decades but its importance to Marlborough is becoming even more significant, following last year’s 7.8 earthquake.

The insurance cost for our wine industry post-quake

Following the November 2016 Kaikoura earthquake many similar issues to the 2013 Seddon earthquake have re-occurred.

Unless you were in an area where you felt the full force of the November 14 Kaikoura earthquake, it is hard to comprehend the intensity of it.