Bubbling under the radar 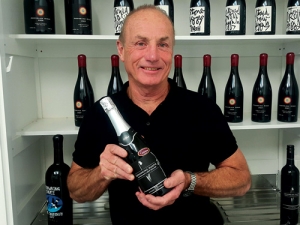 Over the last few years more Hawke's Bay wineries have been adding bubbles to their range and their reasons for doing so may be as varied as the wine region itself.

But what does the growing global interest in sparkling wines like Italy's Prosecco and Spain's Cava mean for a region that is already producing a wide variety of wine styles?

And how do Hawke's Bay's recent efforts stack up against a Ministry of Business, Innovation and Employment report urging the industry to consider radical steps to "restart" sparkling wine production targeted at premium export markets, particularly China and Southeast Asia?

Squawking Magpie branched out into bubbles because it considers it important to be able to offer customers a range that includes a sparkling wine, particularly for festive events.

"It completes the large range produced by Squawking Magpie," owner Gavin Yortt says. "We felt there was a gap and we were doing quite a few business functions and weddings.

"We are now a one-stop shop with supply."

While Hawke's Bay's many subregions -- offering an array of micro-climates and diverse soils -- might encourage winemakers to experiment, Yortt says his company's decision to make bubbles was very much commercially based.

"We certainly didn't do it because we were endeavouring to play with different wine styles."

Now produced as a methode traditionelle wine, Squawking Magpie's fledgling SQM bubbly was made by WineWorks using the charmat method. It was the first produced using plant installed at the company's bottling site in Hastings five years ago.

WineWorks provides six 25,000 litre "scuba bottles", owner Tim Nowell-Usticke says of the thick-walled fermentation tanks. And having a pressure bottling line in close proximity, he believes is key to the successful production of the sparkling wine.

Having invested "hugely" in the charmat infrastructure, Nowell-Usticke is a little disappointed with the uptake.

"The potential is there for Hawke's Bay sparkling white wine. Anyone wanting to can have a go. I figured if I put in the technology for an advanced production system, no-one has to invest anything."

Nowell-Usticke sees huge export potential for sparkling wine. He says that while Sauvignon Blanc was the first style to alert the world to the excellence of New Zealand winemaking, the industry now needs another string to its bow.

"Pinot Noir was going to be the next bright light but it's been an unreliable and unpredictable performer."

The world's expectation of New Zealand white wines is that they should be bright, clean and crisp, he says -- "Sauvignon Blanc fits that bill, and so does New Zealand bubbly."

WineWorks considered where the appropriate varieties were growing and chose Hawke's Bay rather than a South Island site for the company's charmat production plant.

Nowell-Usticke says the problem for New Zealand producers over the last 10-15 years has been the dominance of a single brand selling at around the $12 price point.

However, the New Zealand industry excels at growing grapes for $1 a litre and creating value in making wine that sells for $30 a litre.

"With the secondary fermentation in tank, charmat uses the one bottle once and is therefore more cost effective than methode traditionelle. If you're looking at commercial production, charmat is the way to go."

One of Hawke's Bay's smallest operators, Corozo Estate is phasing out of production.

Potential buyers were invited to blend the wines to suit their individual palate – a unique opportunity for the successful bidder who paid $2500 for the lot.

For a region renowned for its large number of varieties, Pinot Meunier - which, together with Chardonnay and Pinot Noir, is one of the three varieties used in the production of French Champagne - is thin on the Hawke's Bay ground.

Yortt, meanwhile, says he has found a local supplier for Pinot Meunier and may add that variety to the SQM blend.

Mission Estate pioneered methode traditionelle winemaking in New Zealand in 1963, when Brother John Cuttance returned from a trip to France to make his ground-breaking Fontanella. Production was small – customers were limited to a single bottle, paying £1.1s.6d for either a white or pink sparkling wine.

The first New Zealand wines made in commercial volumes didn't become available until the 1980s, and these drew on early harvested fruit grown in the Bay.

The Mission launched its more recent take on a sparkling wine three years ago, taking Pinot Gris and Chardonnay grapes grown on the Greenmeadows site to make Fete.

"We felt the need to have it in our portfolio," says winemaker Paul Mooney.

WineWorks is involved in making the wine using the charmat method.

Black Barn took up the Marlborough option for its methode traditionelle, sending the wine to Number 1 Family Estate for bottle fermentation. The blanc de blanc was awarded best in class in the 2012 and 2015 Hawke's Bay A & P Wine Awards.

While enough remains of this cooler 2010 vintage bubbly to disgorge another 50 dozen bottles, winemaker Dave McKee says that if conditions were suitable, Black Barn would make a bigger parcel of wine and let it out slowly over the years.

In a report entitled What Does Asia Want for Dinner? A Drink, produced as part of the ministry's Food and Beverage Information Project, the consultancy points to the strong import volumes and value growth of sparkling wine into Asia and says the product has a strong fit with New Zealand's capabilities.

Rising incomes, conspicuous consumption, branded luxury and gifting are noted as key Asian megatrends in a beverage marketing currently dominated by France - "a strong competitor with clear strengths, but one that New Zealand has demonstrated the capability to match".

The New Zealand industry now needs to take the next step and "lift its game" in sparkling wine, the consultants say.

While proposing a "defend and grow" strategy for Marlborough Sauvignon Blanc, the report said the French model suggests New Zealand should also have five to six other wine regions of similar size, each specialising more clearly, and that radical steps are needed to "restart" sparkling wine.

Sparkling wine also offers strong opportunities for import substitution on the New Zealand domestic market where it struggles to compete with French Champagne at the premium end of the market.

The industry needs to identify regions that are similar to Champagne for climate, soils, rainfall etc, the consultants conclude, determine what grapes are best suited to a New Zealand sparkling wine style and establish the method of production attuned to New Zealand conditions.

A 19-year soil monitoring programme in Marlborough is showing viticultural use is leading to more compact soils, increased nutrient loss…