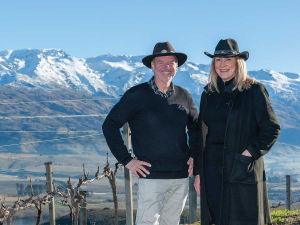 The young girl aspired to being a ballerina instead, training from the age of 3 through to 16, when she grew too tall for her ambitions.

She nonetheless stayed close to the curtain, and Misha’s continued love of all things centre stage is reflected in the wines of Misha’s Vineyard in Central Otago, where The Starlet (Sauvignon Blanc) and the Soloist (Pinot Rosé) share the spotlight with the Cantata and Verismo Pinot Noirs. Their first ever wine, released as a trial a year before the 2009 launch of Misha’s Vineyard, was named The Audition, while the first official release was The High Note Pinot Noir, named for Gloria, who died the year the vineyard was planted.

Having outgrown ballet, Misha opted for a degree in theatre studies and musicology, interrupted by a period dancing for the opera and earning a scholarship to study at the Sydney Conservatorium of Music. She chose instead to complete her degree, which brought her full circle to the Sydney Opera House, where she worked in marketing. From there Misha moved to London to work for the Royal Opera House, marrying a love of the arts with a flair for telling stories that capture the market.

That same flair drew her to the technology sector back in Australia, working for IBM, where she met her future husband Andy. From there they went to Singapore, working for Intel while enhancing their palates and bolstering their wine cellar. “We were both crazy about wine… We spent every holiday in wine regions,” says Misha. The couple had done a Master of Marketing Management together in 1995, and soon after started talking about needing more in life than money. So they devised a vineyard venture that would satisfy their desire for a business and their passion for wine.

In 1999 the couple moved to Auckland, where they built up a cellar of Central Otago and Wairarapa Pinot Noir, while also growing enthusiasm for their project. After 18 months they returned to Singapore for jobs to pay for their vineyard dream, while crafting a comprehensive marketing and business plan. Before they looked at where they wanted land, they crunched the numbers to ascertain how many hectares and varieties they needed for a sustainable operation. They also created a strategy that played to their strengths, focussing on luxury hotels and restaurants in the Asian markets they were familiar with.

By the end of 2003, they’d decided on Central Otago for its Pinot Noir prestige, knowing the lighter bodied red was a sweet match for their market. But they also wanted to draw on New Zealand’s reputation for Sauvignon Blanc, their own passion for Riesling, and to have Pinot Gris and Gewürztraminer in their stable, says Misha. Underlining all their decisions was the need for an estate portfolio – a whopping 11 wines in total - to complement a multi-course wine-matched meal.

The couple spent four days in New Zealand every five or six weeks, looking for a site that was small enough to be boutique, but large enough to warrant its own winemaker, vineyard manager and equipment. After two years they found a hillside landscape of “rocks and rabbits”, with three northwest facing terraces leading down to Lake Dunstan, and put their stake in the ground.

It was only after they’d bought the land that they found remnants of gold mining, and gleaned knowledge about the Chinese miners who had worked Central Otago’s goldfields in the 19th century. Given their intended market, the history was “serendipitous” says Misha, who was delighted to then realise they were on State Highway 8, 8 kilometres from the nearest town of Cromwell, and on land originally known as Sheep Run 238, when it was part of the old Morven Hills Station. The number eight is considered lucky in Chinese culture and it seemed another auspicious sign, says Misha. At their ground breaking ceremony, the couple placed a Chinese coin beneath the first eight vines, which are named The Lucky 8. “We said we are returning the old gold to the land to bring the new gold - Pinot Noir,” says Misha. “I wanted to acknowledge the Chinese miners who had worked and perished on this land.”

The goldmining heritage of the land is referenced in their brand stories and in the historically inspired story of Ah Foo, a fictional character devised by Andy to represent Central Otago’s Chinese goldminers. They also built a recreation of a gold miner’s hut on a high point of the vineyard, using estate schist to evoke the era in which the rugged land was part of a rich gold run, says Misha. “It’s produced gold and fine Pinot Noir.”

Misha had left her job in Singapore in 2004, while Andy stayed on to keep the bank balance up. “He said ‘okay darling, you go and establish the vineyard and when we start making money I will come over’. His job was to make money faster than I could get it out of the bank account,” she says. “I won.”

As much as they knew where their skills were, they also knew where they were not, and invested time and money into finding the help they needed. Viticulturist Robin Dicey came on as a consultant to help establish the vineyard, and Misha ‘jokingly’ announced they needed to hook New Zealand’s best winemaker. Three years after they planted, Olly Masters left Ata Rangi to join Misha’s Vineyard, and the company had the perfect package, she says.

Misha started “wooing” New Zealand wine distribution company Negociants New Zealand a full two years before Misha’s Vineyard had wine in the bottle, and was signed up by the time the wines were launched at the end of 2009, in the midst of the global financial crisis (GFC). Having premium distributors in New Zealand, Hong Kong, Japan and Singapore was the boost they needed to survive that hit, “because success begets success”, she says.

And all along – through the planning, establishment, GFC and now a global pandemic – their own marketing talents have been a vital string to the bow, Misha says, noting that good grape growing and great winemaking are not enough on their own. “We have seen so many small wineries fail, because they don’t have the three skill sets.”

It was their love of marketing that resulted in Olly making 100 cases of The Audition in 2007, a year before commercial production. “We used those bottles of Pinot to learn a little bit about the market,” Misha says. They made appointments, gifted the wine and, “tongue firmly in cheek”, asked for “a leading role” on future wine lists, she says. “Every person we gave a bottle to became part of our journey.” When The High Note was produced, as a tribute to Misha’s mum, they decided the musical and theatrical names would be part of the company’s signature, along with the legend of the Chinese miners.

Both threads are gold when it comes to visiting customers or welcoming visitors to the Cromwell cellar door, established in 2017. “It leads to natural stories and people discover a little bit more about the brand,” says Misha. “It’s that discovery.”

Two decades after hatching a plan, Misha counts herself lucky to work alongside her husband, which they “do with ease” and to have a lifestyle that lets her “drink and talk about wine every day”, indulging in the marketing she loves. “I love the fact that we are here in Central Otago and that we sell wine to
the markets we wanted to, and are in some of the most selective hotels and restaurants in the world.” It’s not always easy being boutique, she says. “But I am happy to come to work every day of my life.”