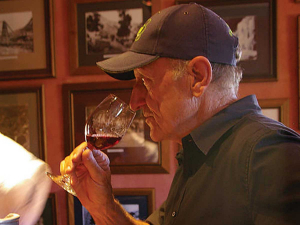 Professor Warren Moran, a prominent geographer and thought-leader for the wine industry passed away on 13 August 2019.

Warren’s involvement in the wine industry began at a young age, helping out in the vineyard at Corban’s in Henderson. I recall him vividly describing the people, the place and the goings on.

This was what interested Warren about wine; its ability to tell the story of people and place like almost nothing else – both from an academic perspective and as something that could be experienced and enjoyed.

When Warren was interested in something, he was really, intensely interested. He wanted to know everything about it. He wanted to understand why people did things like this and not like that, how they came to be here and not there. He was always gathering data, asking questions, testing ideas, talking to anyone that crossed his path to extract a bit more information or a new angle on things.

The interest sparked in the early days at Corbans led Warren to successfully complete his Master’s thesis in Geography in 1958 on the topic “Viticulture and wine-making in New Zealand: its national and regional character”.

Warren’s Master’s thesis gave him an unequalled grasp of the social and cultural roots of the New Zealand wine phenomenon as it emerged over subsequent decades.

He went on to become a teacher and later joined the University of Auckland, eventually becoming a Professor of Geography. He became a highly distinguished and internationally recognised geographer with a broad range of academic interests – always with the common thread of his deep interest in the relationship between people and the land.

It was in the field of geography that Warren made his contribution to the wine industry. He was fascinated with the multiple ways in which people had created such a rich and complex geography for wine, how they learned about and responded to their physical environments, the social, economic and cultural contexts that shaped their decisions.

At the same time, he could see that the role of people in shaping the geography of wine was almost entirely absent from the way that people talked about wine. Most discussion focussed instead on a narrow idea of terroir in which the capacity to make great, or even good, wine was determined by the soil and climate. This way of seeing the world of wine served to lock in a quality hierarchy that was pre-ordained, beyond the control of people, and therefore unassailable.

In 1993, Warren published a pair of seminal papers in highly-ranked international journals which played a key role in drawing academic attention to the human element in creating the complex geography of wine.

Stepping down from his role as Dean of Arts at the University of Auckland in the late 1990s, Warren took the opportunity to devote his considerable energies to a full-time research project into the New Zealand wine industry, funded by a prestigious grant from the Royal Society of New Zealand Marsden Grant and a James Cook Research Fellowship. I was privileged to be a part of the research team, and it was truly a life-changing experience. Field trips throughout the length of the country to interview grape growers and winemakers were illuminating and not infrequently hair-raising due to Warren’s propensity to demonstrate with his hands and look you in the eye during conversation – even when he was driving and you were in the back seat.

Fluent in French and a lover of the country and its wines, he established a research partnership with the Université de Bourgogne in Dijon and the participation of several French researchers. As a result our insights into the New Zealand wine industry were always informed by a contrasting and well-researched perspective from France.

The project had a strong output in terms of academic publication, but probably its most visible outputs for the New Zealand wine industry were: the genesis of the University of Auckland Wine Science programme; a generation of social science research on the New Zealand wine sector; the ground-breaking papers unravelling the idea of terroir for a public audience; and the publication of “New Zealand Wine: The Land, The Vines, The People”.

“Terroir – the human factor” was the first and probably the most impactful of Warren’s public papers. These ideas are also threaded through Warren’s great work, “New Zealand Wine: The Land, The Vines, The People”, published in 2016. The book was shortlisted the Ockham New Zealand Book Awards. This is really the culmination of his lifelong interest in the geography of wine and for many combines so many things characteristic of Warren’s work. If you haven’t read it, you should.

Warren had suffered from dementia for the last few years. His passing away from complications in August is a great loss for the wine sector.