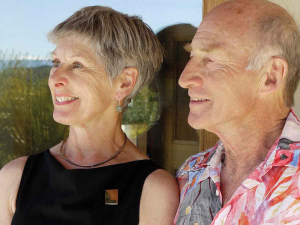 Marilyn Duxson and John Harris, compelled to the world of wine, after a life of science.

But soon after, they received a listing from their real estate agent. It was for 67 acres (28 ha) of bare land, and included half a kilometre of beautiful Clutha river bank, for the same price they’d just paid for their quarter-acre upriver at Albert Town.  The block was located at Tarras on Māori Point Road, midway between Cromwell and Wanaka, surrounded by mountains, and had been on the market for two years; it was considered unproductive and lacking fertility.

Their interest was kindled.  They recalled sipping wines, surrounded by expansive views across the Wairau river plains, during a recent visit to
the Marlborough home of friend John Forrest, who had studied for his PhD in neurophysiology in John’s laboratory in the 1980’s.

“We looked at each other and said what do we do? So we phoned John Forrest and he suggested we talk to Robin Dicey.”

“We were two scientists who loved being scientists and teachers, but wanted our own project that wasn’t in a bureaucratic structure,” said Marilyn.

Viticultural consultant Robin Dicey confirmed, after kicking the soil with his boot, that it would indeed grow grapes.  The “Dicey Boot Test” may not sound very scientific, but on the strength of it John and Marilyn sold the quarter-acre - and with it any plans of a quiet retirement - and Māori Point Vineyard was born.

Transitioning to winegrowing and winemaking wasn’t so different from their previous medical school teaching careers, said Marilyn.  “If you’re trained as a scientist, you have learned the way of how to do new things.  You do a course, you learn from your mistakes.  It’s the same working in the vineyard, you’re always watching what happens, and making lots of hypotheses…

“We are winegrowers, but also scientists. We study the land, weather, plants, animals, and microbes that shape our wines. While our understanding is based on science, our practices honour nature and tradition: sustainable hand-based viticulture, low yields, small native yeast fermentations, and natural winemaking.

“Lecturing is a performance art ... you have to keep 300 students awake so you have to put out a lot of energy.  It’s not that different to communicating in the tasting room.”

When they were whacked back by frost in 2003 which killed 80 percent of their vines, they didn’t even think about not replanting.  It was a tough setback, a “summer in the graveyard,” but they set up frost fighting, sourced new plants, and carried on. “We still had our day jobs then,” said Marilyn.

Māori Point is surrounded by mountains, which are snow-covered in winter and often through summer.   At 240 metres above sea level it’s dry (400mm rainfall) and averages 1000 to 1300 growing degree days.

The soils are derived from wind-blown loess over deep deposits of large boulders dumped at the foot of the Hawea glacier, 10,000 years ago.  Little has grown in the arid environment since then.

“We are changing that, both through our grape vines (which unlike most crops can thrive in this free-draining, low organic content soil), and through our plantings of native vegetation.”

In just a few years of tending the vines, growing flowers and aromatic plants between the vine rows, mowing and mulching, the soils have found a new balance, changing colour from pale sand to dark loam.

Meanwhile John’s international career and background in physiology, molecular biology and microscopy led him naturally to the winemaking side of things.

“I thought about doing the EIT winemaking course. I got the syllabus and read it, but then I realised I’d done 80 percent of it.  And what the course didn’t teach you was how to do things in the winery. There’s some basic things you don’t learn, like how and when to clean a barrel.”

Early vintages were made at other Central Otago wineries - Vinpro and Aurum, and some of the production was sold to Elephant Hill in Hawke’s Bay for a few years.

Co-winemaker Matt Evans and his wife Maggie joined the business three years ago.

“I’m the non-scientist on the team,” said Matt, “but I really like being around scientists.

“Maggie (wife) and I first became aware of Māori Point in 2010, when we came to New Zealand on a scouting trip,” said Matt.   Whilst Maggie was looking at the PhD programme in Neuroscience at the University of Otago, Matt was introduced to Marilyn.

The property embraces 6.5ha of vines, bountiful orchards and vegetable gardens, and ever-increasing native plantings which are bringing birds back.  The winery, tasting room, highly equipped laboratory and two homes are powered by a newly installed 20kW solar array.

There may not be too much time for skiing in their lives, but John and Marilyn did eventually retire from their teaching jobs. They love to share what they enjoy - the wines, and the special environment – with their extended community of customers and friends.

Half of their production is now sold online through the mailing list, or from the cellar door.  There’s the annual Maori Point “Acoustic Picnic” in late January, and talk of winemaker dinners and concerts in the barrel hall.

Those following Māori Point’s social media earlier this year could even watch the wild yeasts at work, via an Instagram feed from a microscope set up in the barrel hall.