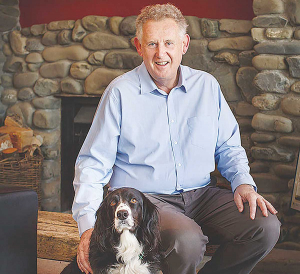 John Forrest who turned his back on neurophysiology in 1988 to become a winemaker, has been acknowledged by the Marlborough Wine industry.

Forrest was awarded the Lifetime Achievement Award by the board of Wine Marlborough back in October. The award recognises the input individual members of the wine industry have played in the development of Marlborough. Wine Marlborough GM Marcus Pickens says the decision to give the award to John Forrest is very fitting.

“In the 31 years John has been involved in the Marlborough wine industry he has strived to make it a better place. His innovations include; the Screwcap Initiative, low alcohol wines, alternative varieties and Appellation Wine Marlborough to name just a few,” Pickens says.

“Marlborough wine owes a lot to his efforts and his determination to make this region stand out on the world stage, as a high-quality producer.”

While born and bred in Marlborough, Forrest didn’t return to the province after leaving school, until 1988. He and wife Dr Brigid Forrest bought an eight-hectare property on the outskirts of Renwick, and planted grapes and apples. Once he got his head around the grapes, Forrest removed the apples and concentrated on wine. Although his first experience as a trainee winemaker at Grove Mill was almost enough to put him off. Apparently an overfill tank of Merlot exploded, with all the skins being lost. There was nothing for it, than to rethink the end product and Forrest decided the only solution was to create a Merlot Rosé. He entered the wine into the Air NZ Wine Awards and surprised even himself when it was awarded the trophy for Champion Rosé. He hasn’t looked back since.

In 2001 he and a few others including Ross Lawson, John Belsham, Sir George Fistonich and Michael Brajkovich MW established the Screwcap Initiative. Sick of the issues surrounding poor quality cork saw the group look for other alternatives. For Forrest it was timely. His 1998 Chardonnay had been decimated by poor cork, with close to 50 percent of the bottled wine ruined.

“In good conscience I couldn’t sell this wine to anyone, knowing that consumers who purchased it had a 50 percent chance of getting a wine they couldn’t drink,” he said at
the time.

By 2002 all Forrest Estate wines were bottled under screwcap and almost all of the New Zealand wine industry quickly followed suit.

In 2006 Forrest Estate released their first low alcohol Riesling, with an alcohol level of 8.5 percent. It was unheard of at the time to produce low alcohol wines that were created in the vineyard and winery without using reverse osmosis. His experimentation led to low alcohol Sauvignon Blanc, Pinot Gris, Rosé and more recently Pinot Noir. Forrest’s findings have played a large role in the NZW seven-year Lighter Wine programme.

He has also been an advocate of thinking outside the square in terms of varieties that could do well in Marlborough. Arneis, Gruner Veltliner, Albarino, St Laurent, Petit Manseng and Chenin Blanc have all found their roots among the Forrest vineyards. Some have worked, others not so well, but throughout it all Forrest has kept an open mind on what the next big thing may be for the region.

In 2018, after years of lamenting about the vast quantities of bulk Sauvignon Blanc leaving Marlborough for overseas markets, Forrest and a number of other individuals established Appellation Marlborough Wine. The incorporated society’s one goal is to protect the reputation of Marlborough’s wine industry. This has been a passion of Forrest’s for years, as he has railed against high yields that threaten the quality parameters of Marlborough Sauvignon Blanc. More than 36 local producers are now a part of the Appellation, that promises consumers the world over, that they are indeed drinking top-end Sauvignon.

On top of that, Forrest Estate owned by him and his wife have been supporters of events in the Marlborough region. For 15 years they provided the sponsorship and vineyard for the Forrest Grape Ride and the company has also been a long-term supporter of tennis in the region.

Even more reason to celebrate

Not only was Dr John Forrest awarded a Lifetime Achievement Award, but his company Forrest Wines picked up three trophies at the recent Marlborough Wine Show. Ironically, given his first foray into winemaking being the Rosé that won a Trophy at the Air New Zealand Wine Awards back in 1990, Forrest was awarded the Champion Rosé Trophy for The Doctors’ Rose 2019 at the recent competition.

It was a day of celebration, given Forrest Estate took out two other trophies, including Champion Wine of the Show and Champion Pinot Noir 2017 Trophy for Forrest Pinot Noir 2017. No accidental success this time.