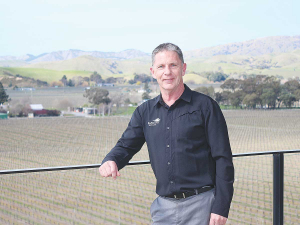 Mention the name Andy Frost to wine industry members in New Zealand and they will comment on what a resolute scientist and researcher he is.

They wouldn’t be far wrong. But what many probably don’t know is that Frost’s career in the wine industry began as a trainee winemaker for Montana based in Blenheim. That was back in 1982. Now 37 years to the day, he has retired from his current role as Project Manager Wine Innovation for Pernod Ricard.

Within those 37 years, Frost has played a major role in the development of the company, which has gone from being called Montana, to Allied Domecq to Pernod Ricard Winemakers. While he began among the tanks and barrels as a trainee winemaker, he moved up to winemaker in charge by the 1990’s. In 1997 he was awarded White Winemaker of the Year at the London International Wine Challenge. Not bad for a man who had studied botany and maths at university.

While being acknowledged in such a way as Frost was at the IWC could be seen by most as a defining moment in their career, Frost downplays the whole thing.

“It was a team award really. Montana New Zealand had actually won something like 22 or 23 medals at that show. Some of the wines were from Hawke’s Bay and some from Gisborne. There were a lot from Marlborough and because I was the person overall responsible for many of the wines, I received the award. But really, it was a team award.”

It is a typical understated response from this self-deprecating man.

Initially Frost’s working career began at Otari Plant Museum in Wellington before he headed back to University as a teaching assistant. By 1982 when he was looking to move on, he decided that wine offered him opportunities, so he applied for a job with Montana.

“I was completely raw,” he says, “although I had read a couple of books and swotted up the night before the interview. I guess I was pretty practical, so they took me on.”

During his 37 years with the company, 20 of those were spent in the winemaking field. He was the winemaker responsible for working with André Lallier Deutz from Champagne, when Montana was developing the New Zealand Deutz Marlborough Cuvee sparkling wine.

“André said to us we had to do things the way he said we had to do them, or else there would be no relationship,” Frost says of that first vintage. “So we did exactly what he said and 30 years later we still have a relationship. For me it was cutting my teeth. I had another mentor who had a whole different approach to how he did things and I did them exactly his way. And it worked, because right from the start it (Deutz) was almost too much of a success. We ran out.”

Frost helped develop the Letter Series of wines that Pernod Ricard Winemakers still produces under the Brancott Estate brand. He also helped with the development of the Montana Reserve wines and played a major role in launching Montana into the US in the mid 90s.

He and three others literally blitzed the US market over a month-long period. Each of the four was responsible for taking Montana’s wines to distributors in different states at a time when very few people even knew New Zealand made wine.

“I always remember that when you were going into places, you took just four wines. What stood out to me was they would taste them and say, ‘these are all good wines. Normally when someone comes in with four wines, there is one great one and there are three dogs. But what you brought in was four great wines.’ That felt pretty good to hear.”

Winemaking wasn’t Frost’s only skill, he was also consulting on a new computer-based system that would help manage processes within the winery. The end result was WIPS – Wine in Production System. Remember this was the early 90’s, computers weren’t the backbone of business they are today.

“When I was at university I did a lot of programming and I could write code. I understood what you could use computers for, so I got quite involved in the consultancy stage of WIPS.”

From that time on, he began “drifting away to a more technical role”, allowing Montana’s other winemakers such as Patrick Materman, Mark Inglis, Nigel Fraser and Jamie Marfell to take on more responsibility.

His scientific background and penchant for research saw him spearheading the move to develop a Research Centre in Marlborough, following Jim Anderton’s Regional Development policy. The government would provide $2m to a region, if local businesses would provide $300,000 per year for five years.

That facility, The Marlborough Research Centre, is still playing a major role in the development of the wine industry, home to Plant & Food and now the site for the Bragato Research Institute. Frost not only helped with the establishment, he remained a board member for 10 years.

Frost’s involvement in research has been paramount to many major NZW projects in the past two decades. When the first Sauvignon Blanc programme was instigated, he helped convince the Montana board to allow three vineyard blocks to become part of the programme. Squires, Brancott and Awatere have been pivotal in the research programme.

“We said we will manage them and we will make commercial wines from them, bottle them commercially so you as scientists have got three wines that you can use to study as much as you like. It meant they didn’t have to use smaller scale wines.”

Yet again he doesn’t take the credit, instead he gives that to his employers.

“I am really proud of the company’s contribution to all the research that has been undertaken in Marlborough. Many other companies have contributed as well, but if you look at the overall picture from the time we really got into research in the early 2000’s, our company has been the major contributor.”

That contribution won’t end with Frost’s departure he says. Masters and PhD students will still work within the company, Pernod Ricard Winemakers will continue to support research such as the Pinot Noir programme and Vineyard Ecosystems programme, and others that emerge in the future. It is that sort of collaboration that helps make New Zealand such a reputable research nation he says.

“We do so much better than other places. Scientists and industry people comment on it.”

With 37 years now behind him Frost says it is hard to come up with just one highlight, but if he had to choose, it would be the establishment of the Sauvignon Blanc Programme.

“In the early 2000’s if you wanted decent knowledge about Sauvignon Blanc from a science point of view, you didn’t come to New Zealand. You went to UC Davis, or Bordeaux University or Stellenbosch or AWRI.

“That has changed after the programme. We now have the knowledge that others want.”

A close second would be the establishment of the Bragato Research Institute, which he has played a major consulting role in.

And his input to the wine industry won’t end now. Frost intends to continue helping on the many committees he is a part of within the wine industry, in particular the Pinot Noir Programme he helped initiate. He will also spend more time on conservation issues, one of his great loves.

But first up he says, he has the bottom half of a two storey house he needs to finish painting.