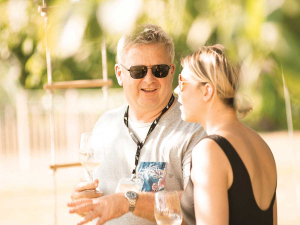 Chris Yorke is off to Austria after 15 years with NZW.

Quite an achievement in 15 years.

Yorke, who has been NZW’s Global Marketing Director took up his new role as CEO of Austrian Wine Marketing Board, on October 1.

It’s a long way from New Zealand to Austria, but Yorke who grew up in Switzerland, is more than capable of quickly finding his niche. Speaking fluent German will help, as will his background in international markets, with both NZW and previously American Express.

It was his marketing role with the latter that saw him first come to New Zealand back in 2002. He was struck by the beauty of the country and the easy way of life.

“I thought, oh god, I need to move here. We had a young kid at the time and we thought this has to be the best place in the world for kids to grow up.”
He was in Hawke’s Bay at the time of this epiphany and given his interest in wine, he was immediately thinking about how he could merge his interest with a long-time career.

“I was thinking about what I could do that would allow me to stay in New Zealand, and wine was what I thought it could be. But it took me two years to get into it.”

In 2004 there were only 17,809 producing hectares in New Zealand. The vintage that year saw 162,100 tonnes harvested. Since then both productive land and tonnages have doubled to what they are now. Yorke says it is the love affair with Sauvignon Blanc and the quality of our wine that has seen exports rise to $1.8b.

“We can’t produce wine cheaply,” he says. “With 700 wineries in New Zealand, we produce less than the biggest winery in Australia. So, we have to compete on quality. That is the first thing. Secondly, is the impact and the amazing growth of Sauvignon Blanc and the expression of that variety that New Zealand has. That has led the growth of exports.”

Markets have also changed over the years. In the early 2000’s the UK was our major market, with Australia following. Today however, the US is our number one export market, with countries like Canada, having a large impact.

“Initially we didn’t have that much wine, comparatively speaking, to export. That is why the focus was on the UK, the mother ship and Australia across the ditch. But then the US really took off and Canada took off. We started doing New Zealand wine tastings in Shanghai over 10 years ago to start getting into other markets.”

Over the 15 years there have been highs and lows that accompanied Yorke’s job. The low was the period during the global financial crisis, that coincided with a surplus of Sauvignon Blanc. It was a learning time for the industry he says.

“We learned that we can only change the things we can affect and the thing we could affect was only growing grapes we had a home for.”
The highs are far more dominant though. The first ever Sauvignon Blanc Celebration in 2016, followed by the equally successful celebration earlier this year. The Pinot celebration, that is about to undergo major changes for the 2021 event. And thirdly, the growth of wine tourism.

“To me it is all about what I leave behind, so wine tourism is the third thing for me. A lot of the marketing of New Zealand wine is aimed overseas. But actually, I have realised that there are a whole lot of wineries that don’t export, and their cellar doors are important. Wine tourism really helps that group of our members. It’s really satisfying seeing how that has taken off.”

As for the move to Austria, Yorke says there are a number of similarities between that country’s wine industry and New Zealand’s. For one Austria grows Sauvignon Blanc – not to the extent New Zealand does. But the very first world symposium on the varietal was held in Austria back in 2008. Austria also has two main varietals; the white Gruner Veltliner and the red Zweigelt, just as New Zealand has Sauvignon Blanc and Pinot Noir. And the third similarity for Yorke at least, is that Austrian wine exports in 2019 are the same as what New Zealand’s exports were back in 2004, when he took on the marketing role for NZW.

Leaving NZW will be bittersweet, although Yorke says he is proud to have been a part of the industry during such a growth phase.

“I feel I have been very lucky to be part of the journey of a very successful wine story.”