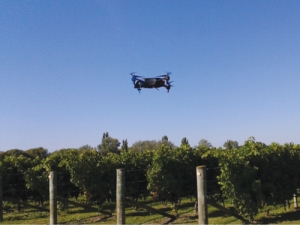 UAV flying over a vineyard block in Hawkes Bay.

Drones may soon be joining the armoury of weapons used to scare birds away from ripening grapes  after a trial undertaken in Hawke's Bay last season.

The trial showed an unmanned aerial vehicle was effective in driving birds off an area of vineyard.

The project team for the pilot, made up of Tim Creagh from EIT Hawke's Bay, Valerie Saxton of Lincoln University and Alice Rule of Second Sight Ltd, wanted to know if the concept of using drones warranted further research.

The trial, undertaken in Indevin's Phoenix vineyard on the outskirts of Havelock North, produced positive result, with the presence of a drone deterring all birds including hawks. As a result, the researchers are planning a more comprehensive project this season.

As Creagh, a lecturer in viticulture, points out, New Zealand's temperate climate suits birds and populations are high.

"There are a number of bird species that are a major pest of grapes. Some species remove whole berries while other species peck and damage grapes allowing fungal and bacterial rots to further damage the fruit.

"The cost of protecting grapes from birds can be very high. These costs are typically for netting vines and bird scaring, which ranges from static gas bangers to armed vineyard staff on quad bikes."

The trigger for the trial was a presentation at the 2014 Romeo Bragato Conference in which Dr Marc Kristic from the Australian Wine Research Institute suggested the possibility of using drones to scare birds.

"This seemed like a great idea," says Creagh, "and a quick look at the internet showed there are a number of unmanned aerial vehicles (UAVs) available for this purpose. However, there was no experimental evidence to support these claims."

Most bird species that cause damage may not be timid but they are easily scared, so having a device operating above the bird -- "most bird deterrents operate from the ground" -- was seen as a possible advantage.

Other UAVs had been tested -- ornithopters that are radio-controlled, have flapping wings and mimic predator birds.

"The problem with these, however, is that they cannot operate in windy conditions, unlike drones that can operate in strong winds depending on the size of the drone itself. The drone in this trial can fly in winds up to 30km/hour."

Bird pressure was regarded as quite high at the Phoenix vineyard, which is bordered by the Tukituki River, orchards and bush.

The UAV was flown in a specified area. Bird species and numbers from various locations within the flying area were monitored when it flew and at midday. EIT wine and viticulture degree students assisted in identifying bird species, establishing when they were most active and counting the number of birds.

The control block, a similar area of the vineyard that had the same variety/rootstock and geographical parameters and used conventional bird scaring methods, was also monitored for bird numbers and species.

Before harvest, the vines in both sections were assessed for bird damage.

Creagh says that because the trial was set up hastily, only four flights per day could be arranged. These took place at first light and then at around 5pm. The drone was capable of flying around 20-25 minutes for each flight, and some 45 minutes was achieved each morning and evening.

The drone used was a quad copter, an off-the-shelf model. The only modification was that it carried a commercial personal alarm on a cable dangling from the drone, which sounded like "a car alarm running off a 9 volt battery at 130 decibels".

The drone was operated by an experienced UAV pilot who manually controlled the flight. Myles Hemera from Apollo Apples gave of his time and expertise in using UAVs.

In general, birds were more abundant during the morning. Thrushes and hawks were the exception, with higher numbers in the afternoon. Bird counts at midday only took place for a short three day period.

Birds were most numerous at midday (52 percent), followed by morning (30 percent) and lastly by afternoon (18 percent). Sparrows were three to five times more abundant in the morning and midday, respectively, compared with the afternoon. Hawks were found in larger numbers at midday and afternoon.

Across all species, the presence of the drone effectively reduced bird pressure by 42 percent compared to conventional bird scaring strategies. Starlings and sparrows, which accounted for more than 75 percent of the total number of bird observations, were very responsive, with numbers dropping by 65 and 61 percent respectively.

The number of hawks reduced by 66 percent.

A method that randomly selected vines and bunches was used to assess the damage. Exterior vines, vines that are at the ends of rows, and interior vines were sampled separately. The amount of damaged berries or missing berries was assessed and expressed as a percentage.

Issues highlighted in the pilot that may occur in the actual trial were:

The drone needs to fly at a random time during the day.

There needs to be an assessment of the bird damage in the control area and also in the treatment blocks before the trial begins.

The amount of bird pressure needs to be similar in both treatment and control blocks.

A drone capable of the volume of work required to scare birds needs to be fairly robust.

Breakdowns can cost flight time, so spare parts need to be readily available.

Creagh says flying drones is a sustainable option as, compared with driving around on a quad bike, drones have no carbon emissions, don't cause soil compaction, generate no lead shot and don't risk native species or people having accidents with firearms.

In its most basic form, it's remarkably straightforward.