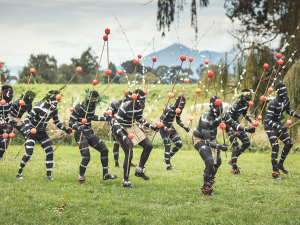 The Hortus 10-year Celebration in 2018. Photo by Jim Tannock

Covid-19 has shone a light on the Recognised Seasonal Employer scheme, with the extended stay of workers threatening their spiritual, physical and mental wellbeing.

That was a key message at the three day Talanoa Fa’apasifika (Pacific discussion) held in Blenheim in June, to consider the impact of the initiative.

“I think Covid has actually been one of the best things to happen to RSE,” says Tim Rae, Relationship Manager with the Ministry of Business, Innovation and Employment’s Toso Vaka o Manū programme, which supports Pacific labour mobility. “It’s been a real stress test for the scheme and on many occasions we have seen employers go above and beyond in caring for their workers, which is fantastic. We have also seen some employers struggle.”

Representatives from Pacific countries involved in the RSE scheme gathered at the Talanoa, alongside representatives from Government, industry, labour contracting firms and those connected to wellbeing and pastoral care, to discuss a better way forward.

During visits to vineyards, some RSE workers raised questions about their visas, health insurance, the ability to repatriate, the ability to return to New Zealand and their options for Covid-19 vaccination. According to a summary of the event, those have been common questions during the pandemic. Issues around mental and physical fatigue were also raised, with the reduced number of workers currently in New Zealand resulting in longer hours for those here. And minimum pay rates were questioned by Pacific representatives, concerned that experienced workers, who have worked in New Zealand for many seasons, were still on minimum pay rates, despite their skill and experience.

Tim says the discussions - and a comprehensive RSE Impact report (see page 49) presented at the event – questioned how the scheme could ensure the potential “triple win” mooted when it began in 2007, designed to boost outcomes for Pacific employees, horticulture and viticulture employers, as well as the Governments involved. “I guess it has raised some questions about how we maintain that triple win. How do we really ensure the worker continues to earn well and be able to remit savings back to the Pacific to their families and communities back home? … Does the separation of families and communities justify the return? That’s the key question we have to ask ourselves.”

The model poses a fale with the family as its foundations, culture as its roof, and four pou – physical, spiritual, mental and other, including the likes of age, sexual orientation and social status. “If any of the pou is weakened then there are issues,” said Fa’amata, who asked whether the model could be translated into the RSE situation.

She noted that the past few years had shaken the fale in its New Zealand context, with some RSE employees working here for more than 18 months because of Covid-19. “When we look at the physical, spiritual, mental, Covid has changed the way we look at RSE,” she said. Some of the workers want to go home, “and that is an issue that has left our family unwell, in terms of our foundations”.

Fa’amata said some of the employers they spoke to during the three-day event were trying to create “a home away from home”, for their seasonal workforce “and we saw how a village setting could be done within a New Zealand context”, she said. “Is that a great example of what we are saying, in terms of family and culture?”

They also spoke to workers, hearing reports of being “very well looked after” and a good relationship with employers. But there were also some questions around contracts and language barriers, she said. “Is it time to have a robust conversation with employers to say ‘what do we need to do now?’”

Hortus General Manager Aaron Jay, a Board Member at New Zealand Ethical Employers, says there’s a pre- Covid and post-Covid world when it comes to RSE care. “Pre- Covid we felt it was a privilege to have the RSE workers here,” he says, describing a high sense of responsibility around pastoral care, accommodation, translation and living conditions. “It’s something we take quite seriously, not because we have to, but because we want to.” Covid-19 has heightened that level of care, he says. “For a lot of our guys there hasn’t been a way that they can get home. They are literally stuck here, so now that pastoral care and wellbeing has become even more important. We are really mindful that they are getting lot of pressure to stay here and earn money, because the income is not there in the islands.”

Hortus People and Culture Manager Lucy Maclean, who attended the Talanoa Fa’apasifika, says Covid has led them to “step back” and consider a broader model of wellbeing, beyond physical health. “Spiritually, how they are staying connected to their culture and their family?” It is a journey for the company, she says. “It has made us stop and think ‘what is wellbeing and what more can we do in that space?’”

The long stint in New Zealand was hardest last winter, “when Covid hit and there was all that uncertainty”, says Lucy. “That was particularly stressful. I think now, the ones who desperately wanted to go home have gone home. The ones who are here are choosing to be here.” But it’s still hard, she says, noting how physically and mentally tired some RSE workers are, after a long period working in New Zealand, “and family is everything to them”.

One of the attendees at the Pacific discussion raised the issue of cultural chasms between the workers’ home country and New Zealand, such as an understanding of the concepts of stress, anxiety and depression. In the Samoan language there are no words for those mental states, and therefore it can be difficult for the workers to interpret and express the way they are feeling.

Another attendee, Josua Tuwere, the first Secretary at the Fjii High Commission in Wellington, suggested that models like Fonofale are useful because they help frame the questions that need to be asked. He, for example, asked RSE workers the day before whether they had time to play touch rugby, in order to destress. “It’s strange question, only until you have been to Fiji and realise that from 3 o’clock in the afternoon … that’s what everyone does.”

The New Zealand Government is looking at RSE reform, but Tim emphasises that policy change is not required to be a good employer, with the ability to address some of the issues raised by the Talanoa. “We want the RSE programme to be the gold standard when it comes to seasonal labour mobility.”