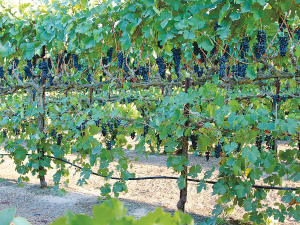 With Scott Henry trellising the fruit is more exposed to light.

This system has been shown to improve yield and fruit ripening and to avoid the shading and disease problems associated with VSP. But he feels as though he is banging his head against a brick wall. MAF National Viticultural Scientist in the 1980’s and with decades of experience in canopy management, it seems strange that his views have been overlooked.

Dr Smart is adamant that New Zealand conditions favour the Scott Henry trellis, for a number of reasons.

The first is that VSP is best suited to moderate or low vigour vines. It would be difficult for anyone to claim our major variety Sauvignon Blanc is
low to moderate in terms of vigour in most New Zealand vineyards, and many other varieties are similar.

Secondly, because of that vigour and the ensuing leafy and shaded canopies, the vines and fruit have a higher tendency to suffer from diseases such as botrytis and powdery mildew. Both of these diseases are inhibited by the UV (ultraviolet) component of sunlight, an issue currently being researched by New Zealand scientists.

Dr Smart says in contrast, Scott Henry opens the canopy up by halving the shoot density, and so reduces the incidence of bunch rot and powdery mildew, and produces more disease free fruit. Obviously spray penetration is improved, and there is less need for leaf removal and or shoot thinning.

The third important reason is that more sunlight into the canopy encourages more fruitful buds, so yield is increased, and the almost double canopy surface area helps ripen the increased yield.

So why haven’t more New Zealanders adopted the system?

“My cynical view is that most grape growers’ neighbours use VSP and they are copying them,” Dr Smart says. “They feel comfortable doing the same thing as others. And there is also the vicious rumour mill. Everyone has heard of someone who tried Scott Henry and it does not work, costs too much, confuses the workers, blah, blah, blah.”

Dr Smart asks, did they do it properly, with essential good timing for turning down shoots? “Timing is everything, as for most vineyard practices.”

Maybe it’s a case of VSP having “worked” for the past few decades, so if it ain’t broke don’t fix it?

“Then how about the argument that growers could make more profit out of the vineyards with Scott Henry? The present system may not be broke, but it sure is not very efficient. In my opinion, it is not the attitude that put man on the moon 50 years ago,” he says.

The financial benefits of Scott Henry are substantial he says, with yield increases of 30 percent or more. Conversion cost isn’t substantial either, as only one wire has to be added per row to train the shoots downwards. Labour costs are slightly higher than with VSP, but Dr Smart keeps coming back to the financial rewards of higher yields, less disease and better fruit composition because of the improved exposure to air and sun. Wine quality is improved.

“All that for the minimal fuss of a few extra hours per hectare of labour. It is a no brainer. It will provide more yield and riper fruit, it will provide better fruit for winemaking both for red and white, and it is less prone to disease.”

The system also means less need for canopy thinning/leaf removal in the summer months, which is a costly add on in terms of labour. And it is well suited to mechanical harvesting and pruning aids as any other four cane system like the VSP.

Dr Smart says “I have found that the only way to convince people is to say, don’t tell me I am wrong, prove I am wrong in your vineyard. This was the approach with the Delegat managers.”

If Dr Smart had his way, the rest of New Zealand would follow in their footsteps.