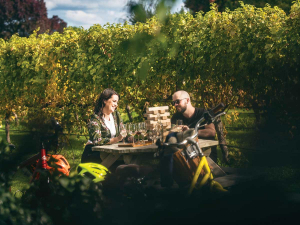 More locals sipping wine al fresco among the vines appears a growing reality, while some socially distanced modifications have promoted more engaged encounters at cellar doors. If international tourism remains suppressed in the longer term, however, the agility and innovation fostered in this period may prove essential for cellar door survival.

A range of wineries across the country revealed differing degrees of Covid-19 fallout following the first lockdown, dependant on both the nature of the businesses and region. Some cellar doors have reduced their hours over the winter months, while others opted to close temporarily. And for those with higher overheads or dependent on international groups, major rationalisation of business models have had to be undertaken.

Seating restrictions at Level 2 have created further limitations, while present challenges have exacerbated some existing issues.

Alcohol licensing applied to cellar doors was raised by several wineries as problematic, especially for those that have had to close their restaurants, effectively removing the food required by the on-licence that allows wineries to charge for tastings.

Wineries that were able to estimate the impact of Covid-19 reported around 40 to 50 percent downturn in their cellar door business. This played a role in the closure of award-winning winery restaurants at Elephant Hill and Pegasus Bay. Some of the biggest losses have been felt by Central Otago wineries, with Thomas Moschetta at the Kinross cellar door - which represents five local wineries - reporting “a huge drop in visitors”, firstly through the absence of the international market, and more recently from Auckland.

“If lockdown happens, we adapt,” says Gibbston Valley Wines’ Christopher Keys. “But nothing replaces the buzz of a full restaurant, or the swift vitality of cellar door chat. Take away humans, it’s half the place.” Nevertheless, the forced period of reflection has already revealed a silver lining for some wineries. Christopher observes that incorporating more tables into the sit down service at the cellar door has resulted in “better interactions, more personal tastings [and] better flow in the cellar door”, while his colleague, Katerina Cerna, notes that it’s provided the opportunity to introduce new packages and products, such as wine and cheese tours. At Clearview, where the “cellar door has been trading very well”, Matt Kirby has found the seated format has permitted “a more structured tasting with almost better engagement”.

Seating restrictions have encouraged a more al fresco focus, which appears to have worked in the winter months and should come into its own in the summer. Waipara’s Black Estate made a virtue of the Covid-related limitations by opening a popular cellar door pie cart “to invite people to enjoy the cooler temperatures and tastings outside with space and fresh air… the simple pleasure of nature post lockdown”, says Penelope Naish (see pg 56), who has witnessed strong domestic interest from both local and North Island tourists.

In the Wairarapa, Schubert has had to expand its outdoor seating to accommodate an influx of visitors. “The Wairarapa has a great advantage of having Wellington close by,” reports Kai Schubert. “People who would usually have spent some time and money in Europe or other long-distance destinations are now visiting the Wairarapa and also not afraid to buy a case or two of more expensive wines.” For him this has resulted in “a significant increase” in visitors, largely from Wellington, and from Auckland when travel has been permitted, that has “more than compensated for the usual flow of visitors we would have had from overseas in winter time”.

In Hawke’s Bay, Pernod Ricard has just reopened its Church Road cellar door after temporary closure. As 75 percent of its trade comes from domestic tourism, Pernod Ricard’s Brent Pilcher is looking forward to “trialling new experiences and offerings to suit the local market”. In Marlborough when the Brancott Estate Cellar Door reopens, the loss of international tourism means it will do so as “a new, fit-for-purpose space that will cater exclusively for private functions and events,” says Brent. “We believe that being agile and able to adapt quickly will underpin navigating and operating in the new normal.”

Wineries with more significant declines in foot traffic have seen some success through engaging in greater digital activity, with loyal customers in their databases proving invaluable. A number of wineries have also taken their tastings online. “We did virtual wine tastings which are accessible via the tasting notes on our website,” explains Hunter’s Jane Hunter, in Marlborough. “And if there were to be a worst-case scenario, we would make more use of these to replace visits to the cellar door. They’re linked with our mail order and we have seen sales come from these.”

“Take what has happened in the past, look at that and flip it on its head and think of the most innovative thing you can do to keep people engaged,” advises Dr Tim Baird of the Faculty of Agribusiness and Commerce at Lincoln University. His research specialises in wine tourism and innovation, which has previously revealed the need for increased digital marketing and the value of winemaker interaction in cellar door experiences. “The current situation might not be all bad as new things come along when people are taken out of their comfort zone. Winemakers are forced to be more innovative and some of these ideas may remain relevant in the longer run.”

Flexibility in cellar door operations appears crucial at this point. At Pegasus Bay, à la carte dining has been replaced by private hire and their own public events at its cellar door restaurant space, such as regular Sunday lunches with a guest chef. “It’s actually been quite refreshing to do something quite different and this model also reduces the impact of potentially going in and out of alert levels on our business,” says Pegasus Bay’s Ed Donaldson. At Elephant Hill, where the restaurant ceased to be viable due to its high dependence on international tourism, Andreas Weiss confirms that it will re-open. However, its focus will shift to “enhancing the cellar door experience for local and national visitors” through wine-driven food pairing.

All wineries spoken to considered their cellar doors would survive in the short term, albeit while facing evolving challenges. In Central Otago, Cerna predicts a return to peak and shoulder seasons, with more competition from national summer destinations, as well as Pacific Island travel when this reopens to Kiwis. However, the prospect of no international tourists in the longer term is creating far greater unease. “When the borders reopen tourists will need to be convinced that it’s safe to return,” says Tim. “However, the way New Zealand has managed the pandemic means we will be in a lucky position in comparison to many other winemaking countries.”