Lessons to be learned from the apple industry 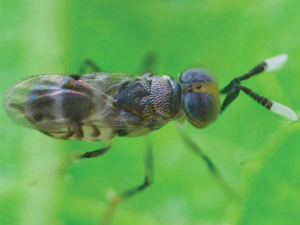 The parisitoid Acerophagous maculipennis (A. mac), introduced into Hawke’s Bay in 2001 to combat Obscure mealybug.

In 2000 the New Zealand apple industry was brought to its knees due to mealybug infestation and the inability of insecticides alone to deal with them.

Export programmes were seriously affected by mealybug infested fruit which significantly delayed or stopped ship loading that resulted in cool stores stretched beyond capacity leading to serious harvest delays. It made the entire industry look carefully at their pesticide programme, particularly the broad spectrum, organophosphate insecticides, and what they were doing to disrupt natural biological control systems within apple  orchards.

Now in 2019, the mealybug crisis has been resolved and the incidence of infested fruit is negligible. How did that happen and what are the lessons for the wine industry?

Jim Walker is the Principal Scientist for Plant and Food in Hawke’s Bay and says there are parallels between both industries.

“Some of the assumptions you have to make about mealybugs in both apples and grapes is they are induced pests. It’s our practices, especially use of broad spectrum OP insecticides that makes them worse.”

By that he means resistance to hard chemicals and the destruction of natural predators within the orchard or vineyard environment.

“More importantly both the acute pesticide toxicity to people and the environment has changed dramatically. Now we only use soft pesticides in the apple industry that are much safer for our orchard workers and maximises our biological control.”
The end result is there are no broad-spectrum insecticides used in the apple industry today.

Pesticide resistance began occurring back in the 1960’s Walker says. “We had organochlorine insecticide resistant mealybugs and leafrollers back then.

By the time we got through to the end of the 1980’s we had mealybug, leafroller and leafhopper also resistant to organophosphate.

“Not only had pest resistance grown but we had also disrupted biocontrol and induced many pest outbreaks. We had destroyed many of our natural enemy associations in our orchards.”

The movement to only ‘soft pesticides’ substantially improved insect biodiversity in apple orchards and resulted in vastly improved biological control outcomes with natural enemies targeting two of the three mealybugs present; the citrophilus and longtailed mealybugs. There was a gap in the biocontrol required for the obscure mealybug but that was solved in 2001 when a parasitoid known as A. Mac was introduced and rapidly spready throughout the Hawke’s Bay area.

“It was a highly successful programme and the obscure mealybug is now hard to find in our orchards. It has all but gone.”

So what lessons can the wine industry take from the apple industry? Walker says aim to increase the biodiversity in vineyards by phasing out all use of the broad spectrum OP and synthetic pyrethroid insecticides.

“You still need to manage the mealybug populations throughout this transition and set with a realistic time frame. It took the apple industry 10 years from implementation of an integrated approach to achieve effective mealybug biological control,” he says. “That realistically will take three to seven years to achieve the same outcome throughout our vineyards.

“Biodiversity and biocontrol in vineyards really needs to be examined to see what happens to mealybugs and biological control in newly planted and organic vineyards. As an industry, we should be able to eliminate SP use in one to two years and can probably eliminate all the organophosphate use in three to five years.

“What we have to remember is that insecticidal control has no future. It is not sustainable, it is just a slow train wreck and that was the train wreck we had in 2000 in the apple industry. Today though, we have a highly effective biocontrol programme.”