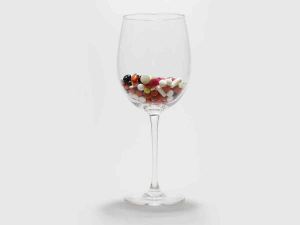 Wine as medicine has a long and interesting history, as Lee Suckling reports.

This trite old adage was once associated with Aspirin; presumably it’s an all-encompassing method for doctors to dole out to patients for night-time pain they don’t want to deal with.

Today, it’s the slogan of Californian brand Lloyd’s wine, literally called “Prescription”, a buttery Chardonnay. The irony won’t be lost on anyone who has heard the name Lloyd’s before: though completely unrelated, it is also the name of one of the world’s biggest chains of pharmacies.

Wine has been used (and misused) for medicinal reasons for centuries. As a fermented beverage containing alcohol wine was once considered safer to drink than water. Even today, many of us consider a glass after work their “medicine” – something to wash down the day and alleviate its physical and emotional aches and pains. We don’t clink glasses with “to good health!” for no reason.

The phrase ‘à votre santé’, which translates as “to good health”, is French and dates back to the 5th Century. Yet wine’s purported medicinal properties are even older. Ancient Greek father of medicine Hippocrates experimented with wine as medicine. “Wine is an appropriate article for mankind, both for the healthy body and for the ailing man,” he wrote.

Not surprisingly, it is the French who took Hippocrates’ words seriously and have the most extensive history of medicinal wine usage. As early as 1395, Hôpital civil de Strasbourg had a working relationship with the Cave Historique des Hospices de Strasbourg (Historic Wine Cellar of Strasbourg Hospices), which is actually underneath the hospital itself. For 600-odd years, many patients actually paid their medical bills with tracts of their vineyards – essentially, an exchange of grapes actually provided the hospital with income while supposedly treating the ills of those who grew them.

Patients would come to Strasbourg from all over France for “wine treatments”; sometimes two bottles of plonk a day to treat various conditions. Until the 1960s a bottle of Châteauneuf-du-Pape could be given for bloating, a Côtes de Provence Rosé may have been used to tackle obesity, and for high cholesterol, one could be prescribed two glasses of Bergerac. In very early days of wine treatments, one might even be told to bathe in a tub of Muscat de Frontignan to treat herpes.

None of this was done with any real evidence; just the word of various philosophers. Thirteenth century British writer on health and medicine Roger Bacon even suggested that wine could “preserve the stomach, strengthen the natural heat, help digestion, defend the body from corruption, concoct the food till it be turned into very blood.” A recipe book for 17th Century home cooks recommended two pints of wine as an “excellent drink against the plague”, moreover. Sometimes wine was used as just one ingredient for a medicinal concoction. The 1,000-year-old Anglo-Saxon medical textbook Bald’s Leechbook states onion, garlic, wine and bovine bile (yes, that’s cow’s stomach juice) could be crushed together, left in a bronze vessel for nine days, and used as an eye salve for Methicillin-resistant Staphylococcus aureus (MRSA).

Still, wine’s negative effects (i.e. the hangovers), were noted. Bacon also wrote, “If it be over-much guzzled, it will on the contrary do a great deal of harm: For it will darken the understanding, ill-affect the brain... beget shaking of the limbs and bleareyedness.”

During the 20th Century, wine was known more for its preventative (rather than curative) properties, although it’s worth noting that the Hôpital civil de Strasbourg only stopped wine treatments completely in 1990.

Over the last 100 years, we’ve come to know about phenomenon such as the “French Paradox”: the lower rates of cardiovascular disease and coronary atherosclerosis experienced by the red-wine-drinking Frenchmen and women. Throughout the 1990s the wine polyphenol antioxidant called resveratrol was thought to be key in blood pressure regulation, but a 2014 Clinical Nutrition meta-analysis of studies concluded that the evidence wasn’t sufficient to back that up.

Where are we at with wine’s medicinal qualities today, in 2019? Don’t be fooled by the tabloid news stories that claim a glass or wine is better than exercise (deceptive studies like this crop up every few months). However, there is general scientific agreement from meta-analyses that between one and two (but not more than) glasses of wine a day can be used for good health; improving things like the heart and the metabolism.

Roger Bacon should however have warned society against more than hangovers, the effects on the brain, and limb-shaking with excess consumption all those centuries ago.

There is now much certified evidence than serious health conditions such as liver damage emerge with people who drink three or more glasses of wine every day. Not to mention everything we know about addiction. What’s the moral of this story? When that bottle of Côtes de Provence Rosé hits your table, just make sure you share it.

A Saint, a Pope and a grapevine

As New Zealand’s wine industry celebrates its 200th year, Dr Richard Smart provides us with a story that links New Zealand wine to the Vatican.