A Saint, a Pope and a grapevine 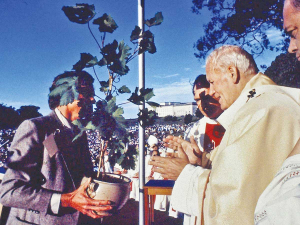 As New Zealand’s wine industry celebrates its 200th year, Dr Richard Smart provides us with a story that links New Zealand wine to the Vatican.

In 1838 a group of French Catholic missionaries under the Bishop Francois Pompallier arrived at Hokianga on the west coast of the North Island. Bishop Pompallier had been appointed by Pope Gregory 16th as the first Catholic Bishop of the South Pacific.

His group of missionaries left the French port of Le Havre on Christmas eve 1836 and landed at Valparaiso, Chile in late June 1837. After taking on provisions they left for the Pacific islands in August and arrived at the small Wallace Island on the first of November 1837.

Father Pierre Chanel and Brother Nizier were left at nearby Futuna Island, while Bishop Pompallier went on to Sydney, then to Hokianga, New Zealand where he set up his first mission. He subsequently moved to the Bay of Islands, which became the early headquarters for the Catholic mission.

Father Pierre Chanel lived with natives on the east coast of Futuna Island at Poi for many years, and was frustrated by difficulties in converting the natives. He was assassinated by the native Musumusu. His body was discovered by Brother Nizier and their companion, a runaway English sailor. They fled to Wallace Island and alerted Bishop Pompallier in New Zealand. No retaliation was brought to natives who proclaimed themselves converted to Christianity! For this, Pierre Chanel was canonised in 1956, and is the first Catholic saint of Australasia.

During my term as MAF Viticultural Scientist based at Ruakura in the 1980s, I was concerned about the virus presence in the National Vine collection; one possible source of virus-free vines was to find early imports to New Zealand before grafting began in Europe in the 1890s to overcome phylloxera, which was known to spread virus. So I commenced a Heritage vine collection at Rukihia.

During my research I learned of grapevines apparently still surviving at the abandoned Pompallier Mission site at Hokianga.

On visiting the site, I was bitterly disappointed to hear that they had been destroyed by 2, 4-D spraying a few years previously. I did, however, learn of a vine surviving at Poi on Futuna Island in the Pacific. This vine was apparently planted by St Pierre Chanel. The leaves of the vines are regarded by the local natives as having healing powers. Nuns at the mission had taken cuttings from the vines which were being defoliated by the natives and had planted new ones behind the mission walls.

I visited Poi in 1983 on return to New Zealand from speaking engagements in the USA and pruned the vines inside the mission walls for the nuns, and for the first time ever they produced fruit. Was this a miracle? Being at latitude 12 S and in the tropics, the vines grow as an ever-green, but with some pruning, new growth produced fruit. The nuns wrote to thank me, and advised me they continued to prune and harvest fruit!

I took photos of the vines and made an ampelographic description. The vine was white elongated berries, with very characteristic deeply-lobed leaves and pink petioles. However, I was unable to import cuttings directly to New Zealand as I had no importation documentation.

I was able to import them to California by courtesy of Dr. Austin Goheen of University of California at Davis, who managed their quarantine facility. I found it would cost an inordinate sum to air mail them from Fiji to the USA, but an obliging airline hostess promised to mail them for me in the USA. I subsequently imported cuttings from California to New Zealand.

Gift to the Pope

My little story of the “saints vine” was met with curiosity by the local New Zealand wine industry. Terry Dunleavy, then CEO of the New Zealand Wine Institute was impressed with the links to New Zealand history, and was able to help arrange contacts for me to present the

vine to the previous Pope John Paul II during his visit to New Zealand in November 1986.

So it was that I presented to the Pope a potted grapevine, a living link with his predecessor Gregory XVI, the first Catholic missionaries, and the first Saint in the Pacific. It seemed incongruous during the television coverage of gift presentation by island communities like Tonga, Samoa, Cook Island and the local Polish communities to have someone giving the Pope a potted plant, and a vine at that!

Where did the vine originate? France or Chile?

Ampelographic studies in New Zealand failed to find a French variety with such characteristics. The question was resolved when one day I was walking from my hotel to the University in Santiago, to lecture, and saw the conspicuous foliage in a domestic backyard, and I was able to grab a leaf sample despite the angry, non-English speaking dog! I compared the sample with photographs, and it was the same vine.

I asked Chilean colleagues about the vine; they considered it to be one of the “pais” varieties, that is one introduced as seedlings by the Spanish conquistadors to Chile after their arrival in 1520. It was their habit to always travel with vines, to provide wine for sacramental purposes.

Being a seedling, it does not correspond necessarily to any present or ancient Spanish variety. DNA analysis is required to determine the vine’s parents, and likely region of origin.

This is all quite a story, and it reflects the spread of the vine from the Old World to the New World, in this instance in two stages. Maybe some New Zealand winery could make a unique wine from this variety.

Wine as medicine has a long and interesting history, as Lee Suckling reports.