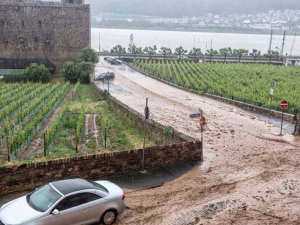 More than two tonnes of topsoil were lost during a heavy rain event at Kloster Eberbach vineyards last year.

Famous for its Riesling, grown on slopes leading down to the Rhine River, Rheingau is one of Germany’s renowned wine regions. The first grapes were planted by Cistercian monks in the 1100s, but these slopes are now under threat because of climate change. Kloster Eberbach, the country’s largest vineyard owner, has some of the steepest slopes in Germany. But those slopes are gradually being turned into terraces, due to weather extremes threatening the vines themselves.

Vineyard manager Stefan Seysahrt says 2019 was the latest to threaten the livelihood of the winery, with extremes that saw hail, 40 degrees Celsius-plus days, and rainfall of 341mm in three days in the middle of summer. That rainfall dislodged more than two tonnes of topsoil from the sloping vineyards, which had to be manually retrieved and placed back around the vines in an effort to save them.

As a result, Kloster has begun a terracing programme that will remove the threat of further land degradation. Vines have to be removed, causing a loss of production, the hills have to be re-contoured and replanted, and the orientation of the vines has to change. Drip irrigation is being installed as well, for the first time in the history of the sites, to counter the high temperatures the region now experiences during summer. New varieties such as Sauvignon Blanc and Cabernet Sauvignon are also being introduced, although Stefan hopes Riesling will remain the dominant variety.

The changes are dramatic, but then so too is the impact of climate change in this small German region. Professor Claudia Kammann from Geisenheim University says data shows how much the temperature has impacted in the past few decades. “Since 1955 we can see leaf emergence has come earlier. It has progressed 1.8 days per decade - over that entire period that is two weeks. In some occasions it is much earlier and we are moving into the period when we still have night frosts.”

Despite being renowned as a cool climate grape growing region, in 2019 Rheingau’s average temperature was 18C - close to the average temperature of the Napa Valley and Australia’s Adelaide Hills. According to Geisenheim researchers, the 18C benchmark is touted as the average for Rheingau by 2050 if climate change doesn’t slow down.

The impacts of increased C02

Geisenheim University is conducting a unique programme to determine the impact of CO2 on grape vines. Free Air Carbon Dioxide Enrichment (FACE) will determine what higher concentrations of CO2 have on vine cultivation, physiology, pest infestation and wine quality.

The levels of CO2  the vines are being exposed to is equivalent to those experts predict for 2050, if levels continue to rise. When compared with the control block within the same vineyard, the vines exposed to higher CO2 levels are growing faster and stronger. Professor Claudia Kammann says there is more biomass to be pruned and the leaf area is larger.

“The amount of grapes you can harvest grows - but not because of more grapes… because of larger grapes.”  Bunch numbers are the same, but the bunches are larger and tighter – causing more disease threats.

Water usage is higher with increased CO2 and pests are also impacted - grape moths introduced into the blocks saw one extra gestation in the high CO2 vines and, perhaps more frightening, the larvae were 25 percent larger than those in the control blocks.

The research programme began in 2014, and Kammann says they have yet to determine the impact on sugar, acids and quality of wine.