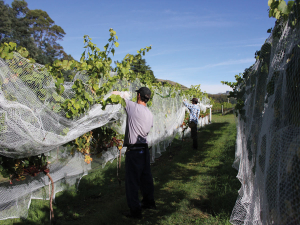 The term Edelzwicker may not be familiar to many New Zealanders, but it has a long and proud heritage that dates back to 1644.

The Alsatian term can be explained, once the word is broken down. Edel meaning noble as in grape variety and Zwicker meaning blend. The ensuing wine is also referred to as a Time Wine, given the grapes within the blend are all picked on the same day.

Philip Barber from Hawke’s Bay’s Petane Wines has taken this historic idea and is about to release his first Edelzwicker, which may be a first for this country. While other wineries have done similar releases made up from blends, Barber believes he may be the first to label his wine with the ancient Alsatian name.

The noble varieties he has used within the blend are Pinot Gris, Chardonnay, Gewurztraminer and Viognier.

All the fruit was picked, as stated on the same day – March 15, which Barber admits was a very early pick for him.

“We hand-picked everything and de-stemmed it back at the winery – with the exception of the five percent Viognier which we kept as whole cluster. They were left on skins for seven days and once it was almost dry we pressed it off into a tank have left it there.”
No oak was used and the wine was bottled on July 17.

When asked just why he was looking back to history to create a “new” style of wine, Barber says he wanted to do something different.

“Rosé is style that is all about fun and I wanted to do something that reflected that. Last year I made a 100 percent Gewurztraminer Rosé which sold out quickly. So this year I decided to do something a little different. I had read about Edelzwicker and it seemed like the perfect style to ignite interest.”

Describing the wine as being a very light pink, he believes it will appeal to those that like Rosé.

“It is low alcohol (11.3%) and fresh fruit forward,” Barber says. He describes the wine as having nice acid, with a “real apricot flavour.”

Petane Wines is situated in the Esk Valley and the small vineyard is made up of five different blocks. While the varieties are limited to only aromatic whites, Chardonnay and Viognier, Barber says he is planting some Pinot Blanc and some Gamay this winter.

“We want to keep our wines in the aromatic stable, but we are planting some red grapes so we can do a skin fermented Pet Nat.”