Rippon: A coming of age 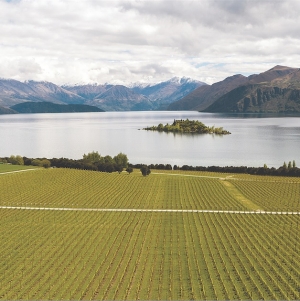 Sitting down to talk with Nick Mills, you could empathise with him if his eyes glazed over at the thought of sharing his family history for the umpteenth time...but that couldn’t be further from the truth.

Bristling with enthusiasm having just hosted a very special series of events where Rippon celebrated 100 years of farming and 30 years of wine making, Mills’ eyes lit up when given the chance to talk about family, the land, and the years of growing up with soil in his veins.

When his late father Rolfe and mother Lois first experimented with grape vines in 1975, it was hardly a fly by night folly. From a young age, Rolfe had always had an inquisitive nature and was forever trying to figure out the potential of this unique landscape. Wine was not foreign to him, and when returning via Portugal after the War, he noticed schist in the soil. An idea for what was once an isolated high country station, took hold.

In those formative days, there was much trial and experimentation to work out which varieties grew best and where. With pretty much every clonal material available for Pinot Noir planted somewhere on the vineyard, the initial philosophy was to get it populated first and then figure out what the best performers were and use that information to structure the next parcel of land. Thus began a 20-year process of selection.

“There was no specter of financial gain from farming in this fashion, so much so that there was a government warning against doing it,” says Mills.

“With a certain amount of desperation, yet a determination to succeed, certain parcels of the land were sold off until they arrived at the 15 hectares that forms the vineyard we have today. With no more land to sell, this was a business that simply had to survive, there was no other option.”

Before coming back to the land, Mills did experiment with other interests. From undergrad Philosophy to following his dream of being an Olympic skier, he always knew that the land, wine and Wanaka was “where I could belong”.

After a career ending knee injury scuppered the ski dream, Mills spent four years in France before returning to Wanaka and taking over the vineyard in 2002.

Fast forward to the Sunday morning of Labour Weekend, and 42 very lucky guests were treated to a vertical tasting of 20 Rippon wines.

“It was a great opportunity to see where we had come from. It was an event that had been touched upon in the international context at certain promotional events, but there was a real need to do it for ourselves, a chance to invite special friends from the industry to share in our journey.”

From a local doctor who had been buying their wine from the very beginning to a selection of Central Otago wine alumni, five of whom had worked as winemakers at Rippon, Mills describes the occasion as very emotional.

John Saker who was present, likened the experience of tasting the old bottles to super 8 home movies,

“It’s a way to remember summers past, in each bottle flickers a ghostly remnant of fruit that grew and ripened under conditions that only happened, exactly that way, that year.”

Indeed, it was the opening of a 1990 Pinot Noir that had Blair Walter (Felton Road) reminiscing:

“The 1990 Rippon Pinot Noir was so pivotal for me that I can still very distinctly remember drinking it, 22 years later. I was working in Oregon and Rippon winemaker Rudi Bauer came to visit and left me a bottle. The wine was stunning and amongst the Oregon Pinot Noirs I was mostly drinking, it had a vibrancy and depth of fruit that was extremely impressive. Little did I know that four years later I would work vintage at Rippon and then forever after in Central Otago.”

While much of the weekend was about celebrating the past, Mills is very focused on the future. Not wanting to rest on their laurels, Rippon today is all about staying functional and that means realising the wealth of their land.

This has lead to the development of additional assets, most notably the impressive rammed earth tasting hall. But even with a building that is perfect for hosting music, art and theatre, which it is being used for, the structure is still one element in a bigger vision that will include a gravity fed winery.

But, rather than build the winery first and as he points out; “Make no extra money off 15 hectares of bio-dynamically grown grapes and go broke and get thrown off the property”, the hall was built first to generate an additional revenue stream.

“Things are starting to make sense of themselves now. We have just employed a commercial manager for the winery so we are ready to embark on the next chapter. This celebration allowed our whole team and not just my family, to stand back and have a look at what we have become, see how other people see us and what we mean to them. We saw the occasion as marking more than just a milestone of winemaking it was about giving ourselves a pat on the back.”

Pull the thread of family succession at Rippon, and you’ll find yourself at Wānaka Station in 1912, with its new owner Percy Sargood. Follow it even further, to 1895, and you’ll find the enterprising Dunedin merchant at a seminar given by viticulturist Romeo Bragato, perhaps seeding the idea of wine in the arid climes of Central Otago.