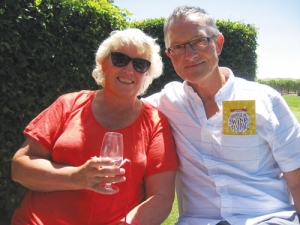 Having travelled from Wellington for the festival, Heather and Dan Twigg bask in the sunshine at Alpha Domus.

The next Bridge Pa Wine Festival promises to be even bigger and brighter after this year’s inaugural food and wine event met all the organisers’ targets.

Hawke’s Bay turned on sunny calm weather, drawing about 1000 people out to the winegrowing subregion west of Hastings. While the Bridge Pa Wine Association focused on marketing the day to locals, word of mouth and the eventfinder site also saw many out-of-towners – among them a good number of Aucklanders making the most of their long anniversary weekend.

Chris Wilcock of Ash Ridge said the association’s members decided to stage the festival because they had fielded so many inquiries from people disappointed that Harvest Hawke’s Bay had been discontinued.

Their close proximity made for relatively straightforward transport arrangements.  Special buses transported about half the revellers from pick-up points in Hastings, Havelock North and Napier and shuttles moved regularly between the wineries.

Wilcock said the association, whose members also include Abbey Cellars, Alpha Domus, Ngatarawa, Salvare, Sileni Estates and Triangle Cellars, is aiming to attract 50 to 100 percent more festival-goers to next year’s event.  It will be held on Saturday, 23 January to tie in with the Wellington Anniversary weekend.