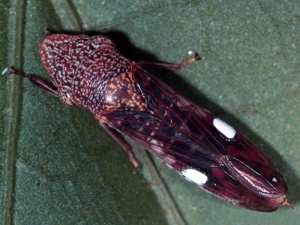  Glassy Winged Sharp Shooter, one of the greatest biosecurity threats.

Biosecurity is too important for our sector to ignore.

Unwanted pests or diseases could have a significant impact on the industry by effecting the production and/or the quality of our products. Some of the most destructive pests, which could seriously damage our industry include:

At any one time there are approximately 40 biosecurity responses underway in New Zealand. The majority of responses impact the wider horticultural sector, highlighting the impossibility of reducing biosecurity risk to zero at the border, while enabling trade and travel to flow freely. Consequently, it is essential for our sector to be fully prepared to respond to threats that could impact the long-term sustainability of our industry.

This partnership makes best use of the skills, knowledge and resources of both government and industry to reduce the risk and give everyone the confidence that the best decisions are being made.

To improve biosecurity outcomes for our sector New Zealand Winegrowers will soon be seeking to gain mandate from our members to join the GIA. As a GIA Deed signatory, we would be more in control of our own outcomes in regard to biosecurity readiness and response, rather than relying on other industry organisations, or MPI, to make decisions on our behalf.

What are the benefits of joining the GIA to our industry?

By joining the GIA we get to have our say as an industry about the direction of biosecurity in New Zealand. There are three key benefits that you can expect to see if we join the GIA:

New Zealand Winegrowers will be notified of potential biosecurity risks earlier and have decision making rights on when to initiate a biosecurity response, and on which strategic direction to take when dealing with threats as they emerge.

Through an Operational Agreement New Zealand Winegrowers will have decision making rights on readiness priorities to help keep out our most unwanted pests.

The GIA will provide industry signatories with clearer expectations from the wider biosecurity system, and more opportunity to become actively involved in the management of associated risk.

What does it cost to be part of the GIA?

As a partner New Zealand Winegrowers will be expected to meet our sector's share of costs for:

· Any biosecurity response that the sector benefits from, starting from mid-2017.

Even if we don't sign the GIA Deed New Zealand Winegrowers members will still likely pay additional costs. MPI may seek to recover the costs of readiness and response activity from that non-Signatory sector through a Biosecurity Cost Recovery levy. The Biosecurity Cost Recovery levy will allow MPI to collect funds directly from members of the non-Signatory sector, and not through its representative industry organisation.

Deed signatories get to make key decisions regarding who non-signatory beneficiaries actually are. This means for a potentially expensive biosecurity response other industry organisations can make the decision that our sector is a beneficiary, even if there is not strong evidence to support this, and that MPI should look to recover costs directly from members.

How would we fund being part of the GIA?

Consultation with members on signing the GIA Deed

In July, New Zealand Winegrowers will consult with members with regard to signing the GIA Deed. Closer to the time members will receive a consultation document explaining the GIA approach, the mandate process and the costs and benefits of becoming a GIA partner.

New Zealand Winegrowers plans to hold regional meetings with members that will include discussion of GIA. Meetings will be scheduled between 2 July and 5 August 2016, which are likely to be held in nine winegrowing regions.

After these meetings New Zealand Winegrowers will collate feedback and send a high level analysis of feedback to all members.

Depending on the outcome of the initial consultation, it is proposed that the New Zealand Winegrowers seek an electronic vote commencing on Monday 8 August and closing 2 weeks later on Friday 19 August. The results will be announced at the Bragato conference on 24 August 2016.
In summary

As a member of the GIA New Zealand Winegrowers could effectively: work with government to monitor and manage biosecurity risk; coordinate our sector's participation in biosecurity activities; and influence government across the biosecurity system.

This work will involve answering the following questions for our sector:

· Where do we want to be with biosecurity as a sector?

· What risks should we be focused on and ready for?

· How can we work with others to mitigate these risks effectively?

As a GIA partner, if we can identify our industry's biosecurity priorities it will enable us to clearly communicate to the other GIA members which biosecurity activities are, and are not beneficial to our industry. This will ensure that our biosecurity funding is only spent on activities which help us to deal with our most unwanted pests.

If you have any questions about GIA or any biosecurity questions or concerns contact This email address is being protected from spambots. You need JavaScript enabled to view it. or L +64 3 2654057 M +64 21 1924 924.