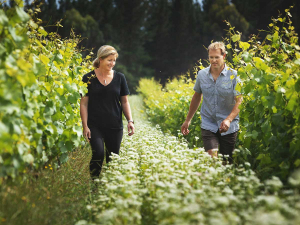 And that’s “got to be a good thing”, says the Plant & Food Research Senior Scientist, as he researches how vineyard biodiversity might aid pest and disease management. “With the quest to enhance vineyard biodiversity often initially focusing on plant communities, it can be anticipated that beneficial insects and beneficial fungal communities will eventually follow,” he says. “Greater species richness and abundance will increase the potential for biological control, a natural ecosystem service, to better regulate insect pests like mealybug and a pathogen like powdery mildew.”

Cover crops are springing up beneath vines on organic and conventional vineyards alike, while native plantings around the edges are helping to break up the grapevine monoculture, says Vaughn. “There are a lot of people across the winemaking spectrum who are either already undertaking this work or opening their mind to the prospects offered to them and their vineyard.” That may be partially driven by aesthetics or marketing opportunities, but it may also be because other measures – including the broad spectrum organophosphates once used – were not getting the results required when it came to managing mealybugs, he says. “Hence, the status quo wasn’t always working. So, what can we do that is different, and which might help us achieve a better outcome? Is enhancing the biodiversity in and around New Zealand vineyards a positive way forward? It is a question that really needs to be explored.”

And they’re questions he asks daily, as he considers how increased plant biodiversity might help attract and retain beneficial species, and which plants might draw insect pests, for example, away from the grapevine. He also recognises that by increasing plant diversity there may be downsides to consider. “While there are likely to be a lot of positives to be gained by sensible habitat manipulation, there is potential for some negatives to be introduced as well. We need to get a handle on what some of those negatives might be and how they might impact vine production.”

For example, some of New Zealand’s indigenous plants are known to host viral pathogens, “which may or may not have an adverse influence on the grapevine”, says Vaughn. “We need to identify and understand what those risks are so we can inform industry and then mitigate or manage that risk as necessary.” Another example of possible unintended consequences of habitat change might be the attraction of unwanted bird species, or to increase rabbit populations so they become a problem for the vineyard, he adds. “It is important to try and identify as many of the positives and negatives as resources will allow.”

Vaughn says the science around ecological services on vineyards is sometimes drawn from anecdotal evidence or from the vineyard operators themselves. “In years gone by, some of my best research questions have come through conversations with growers… They see things in their vineyard that generates a question, which can lead to some really important new knowledge and a better understanding.”

After 17 years working in vineyards, Vaughn believes enhancing vineyard biodiversity through a combination of indigenous and exotic plants will offer the species diversity and abundance needed to occupy nature’s “many niches”.

“This will enable the beneficial species to migrate into and to survive in the vineyard so they can fulfil their respective ecological roles,” he says. “The vision? A vineyard environment rich in biodiversity is able to reduce reliance on pesticides without compromising grape yield and wine quality.”

Farmers discovered that there are many ways to protect and enhance mahinga kai and biodiversity values while visiting Waimak Farm in Eyreton recently.

Cloudy Bay’s 2020 harvest is well underway, but Mark Lovegrove is more interested in harakeke and grasses than harvesters and gondolas.