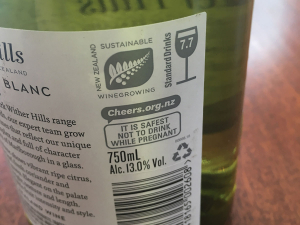 Every bottle of New Zealand wine has the standard measure on its back label. If is says 7.7 standard drinks that means it will take your liver 7.7 hours to process the alcohol in that bottle and there is no way to speed it up.

Jude Walter is the programme manager and says never in Lion’s wildest dreams did they envisage the programme becoming such a national success.

“We started running the programme in 2013 and all Lion New Zealand employees were taken through it that year, which was about 1000 people.”
Within two weeks of the first session Lion was receiving expressions of interest from other businesses who were keen to have it run for their own staff. It took 18 months and continued interest before Lion realised that the Alcohol&Me interactive alcohol education programme could make a difference on a larger scale.

She says the programme is incredibly relatable and has been built with the consumer at heart.

“It has to be relatable and we know that if you start waving the naughty stick and saying, don’t, don’t, don’t, it has very little effect and impact. So the way we describe it is; we have a goal to be the drinker’s friend. Everything is delivered as if you are talking to your best friend and wanting to help them out.”

There are three offerings for businesses within the Alcohol&Me programme. A full face-to-face group facilitated workshop that takes between two and a half to three hours. There is also an interactive quiz for groups and a self-guided online module.

A pre-survey is undertaken prior to the face to face sessions, so Walter can tailor the course to suit. She says all the information is confidential.

“We have no way of determining who answers what. None of the information goes to the company, it stays with me so I can tailor the programme to ensure people get the most out of it.”

Much is based around what a standard drink is, something Walters says few people understand.

“That is something that New Zealanders just don’t get,” she says. “The latest consumer research that we did back in November/December found that whilst it had improved in terms of the number of people who had heard the term standard drink, no one in the survey of 400 plus people could accurately describe what a standard drink was. No one.”

Despite this being the crux of drinking responsibly.

Walter says one of the eye openers for people is when they suddenly realise just what constitutes a standard drink.

“In the workshop we have them actually pour what they think is a standard drink. We have wine, beer and spirits there and get them to pour into a glass what they believe is a standard drink. That is the single biggest aha moment for people. They think shivers, when I answered that question in the pre-survey, I said I had three standard drinks a week. Actually, I was having six.”
The significance of the standard drink is that the average adult liver can only process one standard drink an hour and there is no way to speed this up. Anything more than that and the person will start to feel the effects of alcohol.

Getting that message across to as many New Zealanders as possible is paramount Walter says.

“Imagine if every single New Zealander knew what a standard drink was and that it takes an hour to process each standard drink  – that would be the holy grail. We truly believe that it would have a fundamental impact on New Zealand’s drinking culture.”

Currently the Alcohol&Me programme has been taken on board by 86 businesses in New Zealand and reached more than 27,000 individuals. If you would like more information about the programme, contact Lion’s Programme Manager, Jude Walter, email; This email address is being protected from spambots. You need JavaScript enabled to view it. or phone 027 286 3961. You can also check it out online at www.alcoholandme.org.nz