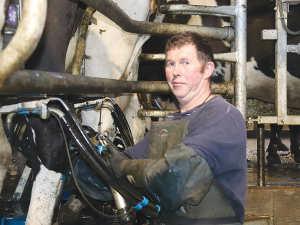 Irish scientist Dr Dale Crammond believes there is a huge opportunity for NZ and Ireland to cooperate more – especially in terms of methane research.

Dr Dale Crammond, who works for the Irish Ministry for Agriculture, Food and Marine, was a keynote speaker - via video conference - at the recent NZ Agricultural Green House Gas Emissions (NZAGHG) conference in Wellington.

Later, speaking to Rural News from Dublin where he's based, Crammond noted that in the past NZ and Ireland were rivals in terms of international markets. However, he believes that the situation has now changes and the two countries should become allies and collectively deal with the people opposed to dairy who don't fully understand the industry.

Crammond believes there is a huge opportuntiy for the two countries to cooperate more - especially in terms of research into methane research.

"We have done some significant work to date, but I see huge opportunity to scale up and ramp up investment in research to identify something that can tangibly reduce methane emissions from livestock," he says.

"If we can do that and get methane emissions on a declining trend for the long term, we would have a very different narrative in terms of agriculture and livestock based protein."

According to Crammond, NZ is a bit ahead of Ireland in research into greenhouse gases. He says while Ireland has some significant research projects underway and there is more opportunity to expand this.

"It doesn't make any sense, at a global level, for two different countries to be doing the same research to achieve the same objective. So somehow we have to pool our resources," he explains. "There are no two better countries to do that given the historic ties we have together."

Crammond believes we have a great base but have to increase our research spend in both jurisdictions and invest more in feed additive research because that is showing the greatest promise.

The product he is referring to is a ruminant methane inhibitor called Bovaer, which is produced by the Dutch global resarch company DSM. Trials of this product are now taking place in NZ in conjunction with Fonterra as well as in Europe.

At the NZAGHG conference there was much positive talk about Bovaer and how it may be able to play an important role in reducing methane emissions, from dairy cows in particular.

In terms of collaboration, Crammond says Covid has thrown up a challenge in restricting face-to-face contact between scientists and policymakers from different countries. He says while a lot can be done using technology, nothing beats people being in the same room.

Dr Dale Crammond says the other option which offers huge potential is breeding animals that are low methane emitters.

However, he cautions that this is a long term solution and will not offer significant improvements in the short term.

"Clearly there has to be a reorientation of the breeding programme with both beef and dairy to select the traits that impact on methane production in the rumen," Crammond told Rural News. "Maybe we have to breed smaller animals and ones whose feed efficiency conversion is much better. As we move towards climate neutrality, I think breeding is going to become really important."

But again, Crammond notes that in the process of breeding low methane emitting animals, it is important that other highly desirable production traits in the animals are not lost.

Solutions for dealing with methane on-farm

Farmers can expect good science-based, viable toold to deal with their greenhouse gas emissions within the next five years.

That was one of the key messages coming from the recent conference on agricultural greenhouse emissions.

Dr Harry Clark, the director of the NZ Agricultural Green House Gas Research Centre, says the mood of the conference was one of optimism that solutions were developed. He says one of the most promising options is nitrate inhibitors, which are being trialled overseas now and is proving very effective.

However, Clark says in dealing with greenhouse gas emissions (GHG) will likely involve a combination of tools and solutions. He says there were two key messages from the conference.

"Firstly, NZ has to be active in its approach to climate change and has to take action - along with the rest of the world - to reduce GHGs. It isn't a choice for use because we are a major exporter and our customers are saying that we have to do that," Clark says.

"The phrase used by one person was 'customers are controlling the playing field' and the customers are saying we want you to reduce your GHG emissions. So, the message was - we have to do this."

But he adds that the other side of that message was, technology is being developed now that will help farmers achieve what they are being asked to achieve.

"So, from politicians and industry the message is that we have to take action, and from the science side we got some positive messages that here are some technologies that are coming on," Clark says.

OPINION: Whatever the Labour Government decides on climate change, it never pleases the mob at Greenpeace.