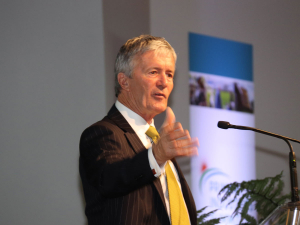 OPINION: Moves by the Government to end New Zealand's live export trade is more about politics than ethics.

Sure, it argues that the trade "does not uphold New Zealand's reputation for high standards of animal welfare" and that it does not fit with the country's "social conscience". But that is just - to coin a phrase used by Gulf War veteran General Norman Schwarzkopf - bovine scatology.

These claims do not marry with the actual facts. The reality is that the Government is shutting down a legitimate $500 million trade because it polls well to ban it. The screaming skulls from the likes of SAFE, Greenpeace and other so-called animal activist groups have got in the Government's ear and won them over by feeding constant, unchallenged misinformation about the live export trade to the public.

David Hayman, spokesman for the Animal Genetics Trade Association, is right on the money when he describes the Government's decision as one that is aiming for short-term political kudos.

Agriculture Minister Damien O'Connor's mealy-mouthed concession that the decisions "will affect some farmers, exporters and importers..."

Claims made by critics of the trade that animals suffer and there are high death rates are not borne out by the facts. Transportation of animals from New Zealand is governed by the strictest animal welfare standards in the world. The welfare of each travelling animal is independently verified by vets on behalf of Ministry for Primary Industries, with 99.9% of animals arriving at their destinations in healthy condition.

South Island-based livestock broker Peter Walsh, who has vast experience in the trade, says the ships animals travel from NZ on are professionally run and well manned with high veterinary support. Even O'Connor concedes, "improvements have been made to the practice over recent years".

Unfortunately, the live export trade has suffered from constant misinformation fed to the public by the likes of SAFE and Greenpeace and the Government has listened to them.

Hayman sums it up correctly when he says "This is an ill-informed, massively consequential decision for the nation, to earn short-term political brownie points from a few activists."

Sad, but true. That's political expediency for you.